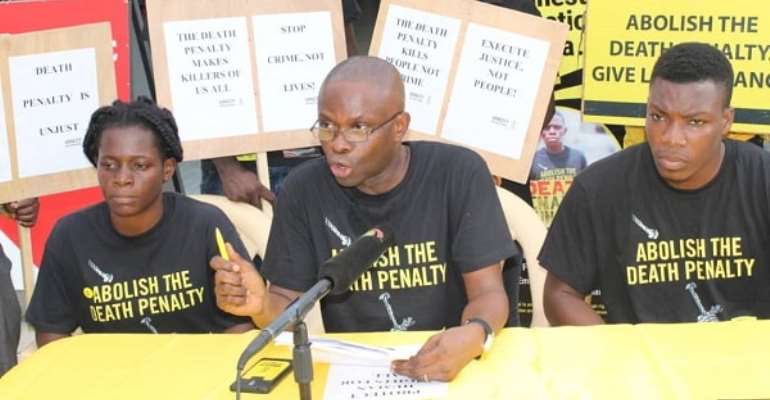 Mr Samuel Komla Agbotsey (middle), Campaigns and Fundraising Co-ordinator for Amnesty International, Ghana, addressing the public on the impact of the death penalty on children. With him are Paul Gozo (right) and Gloria Emeka, both members of AI Ghana . Picture: Patrick Dickson

Amnesty International (AI), Ghana is urging government to abolish the death penalty, as recommended by the Constitutional Review Commission (CRC).

It said abolishing the death penalty would reduce the impact of capital punishment on the children of persons sentenced to death.

“The children of incarcerated parents who are on death row have not committed any crime, yet they are directly impacted by their parents’ involvement with the criminal justice system," the Campaigns and Fundraising Co-ordinator of AI Ghana, Mr Samuel Komsa Agbotsey, said.

Campaign
Mr Agbotsey was speaking at a campaign dubbed: ‘Public action on the impact of the death penalty of children’ organised by AI to mark the 17th World Day Against Death Penalty on the theme: “Children: Unseen victims of death penalty".

Statistics
Ghana has not executed any convict in the last 26 years. The last execution carried out in Ghana was in 1993. It was by firing squad.

Statistics at the Ghana Prisons Service indicate that there are 180 prisoners on death row, including foreigners from Benin, Burkina Faso, Nigeria and Britain.

Mr Agbotsey said so far little attention had been given to the children of persons sentenced to death or executed in Ghana.

"We don’t even know how many children have immediate family members on death row in Ghana. Worse still, we don’t know the effect that having a parent executed will have on children’s lives and the cost society may pay for that impact," he said.

He said AI was opposed to capital punishment in all circumstances, since “whether or not a parent’s death sentence had been lawfully applied, his children were affected”.

Effects
Speaking to the Daily Graphic, Mr Agbotsey urged the government to follow the examples of some African countries that had abolished the death penalty, such as Guinea, which abolished it in 2001, Côte d'Ivoire and Senegal in 2004, Togo in 2009, Benin in 2016 and Burkina Faso in 2018.

The death penalty, he said, had effects on society and consequences for the attainment of the Sustainable Development Goals (SDGs), which aim at not leaving anyone behind.

A death sentence, he said, offered the illusion of closure and vindication, but added that “no act, not even an execution, can bring back a loved one or a heart terribly wounded. The pain and loss of one death cannot be wiped away by another death”.

Mr Agbotsey pointed out that the rights of children of parents sentenced to death or subjected to execution were seldom discussed and had largely been neglected.

He said such children were stigmatised and faced multiple forms of discrimination, while their rights, as enshrined in the Convention on the Rights of the Child, were not safeguarded.

“In addition, the stigma associated with that often made it difficult to find foster parents or alternative caregivers for the children,” he said.

“To a child, the loss of a parent is deeply traumatic in any circumstance. But, unlike a parent’s death from natural causes, when it results from a state-sanctioned execution, it is especially confusing and frightening,” he added.

Also, he said, children with a parent facing the death penalty might feel invaded by anger and a deep sense of uncertainty, high levels of stress and anxiety as the execution was announced, delayed and appealed

“They are traumatised, and, with low self-esteem, they suffer from constant nightmares or loss of sleep and eating disorders. They lose concentration and interest in school, as well as the desire to engage in recreational activities or play, and finally some drop out of school,” he added.