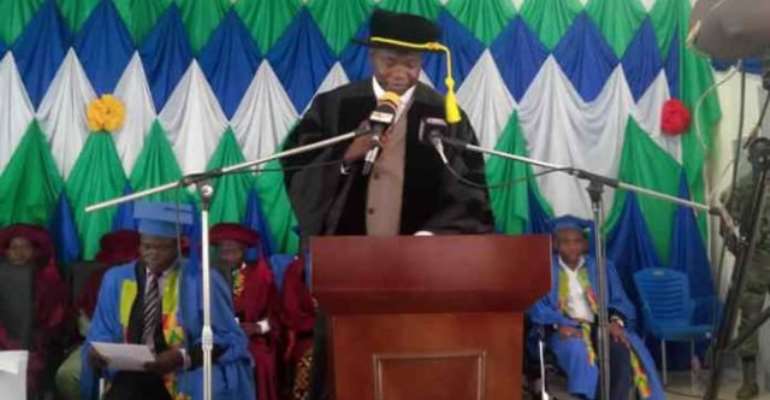 The Acting Principal of the Wa Campus of UDS, Prof. Emmanuel K. Derbile speaking at the ceremony

The Acting Principal of the Wa Campus of the University for Development Studies (UDS), Prof. Emmanuel K. Derbile has stated firmly that the management of the University will not condone any acts of sexual harassment in the school.

He said victims of sexual harassment should never feel intimidated and entreated them to muster courage and seek the necessary support.

Prof. Derbile made the observation when he stood in for the Vice-Chancellor of UDS, Professor Gabriel Ayum Teye at the 27th Matriculation of the University at the Wa Campus in the Upper West Region.

Prof Emmanuel Derbile emphasized that no staff has the right to trade grades for sex, saying the University for Development Studies has robust Policy on Sexual Harassment to protect the interest of both staff and students.

He cautioned staff not to take advantage of what he described as “innocent but vulnerable students” by exploiting them sexually and advised male and female students to be circumspect in their relationship with the opposite sex.

Prof. Derbile commended the matriculants for gaining their right of entry into the University on merit and dilated on the 2019/2020 academic year admissions.

He said: Out of the total number of 19,193 applications, received the University admitted 9,476 for both undergraduate and postgraduate students.

Male students constitute 51.94% of the total number of students admitted while females constitute 48.06% which indicates a significant increase in females admission this year [2019] compared to the previous year.

“Management of the University is doing everything possible to attain parity in the admission of both males and females in the coming years”, Prof. Derbile stated.

The Wa Campus of UDS admitted a total of 1,411 students, made up of 579 for the Faculty of Integrated Development Studies, 526 for the School of Business and Law with 306 pursuing their studies at the Faculty of Planning and Land Management.

The issue of academic thievery equally came under the microscope.

Commenting on it, the Acting Principal of the Wa Campus of UDS indicated that the University is committed to nip the creeping phenomenon in the bud.

He added that “to fight the canker of plagiarism, the University had subscribed to anti-plagiarism software -TURN-IT-IN- for use by students and staff.

“The threshold for the similarity index with usage of the TURN-IT-IN is pegged at 20% level of acceptance, Prof. Derbile averred.

The freshmen and women were advised to be guided by the rules and regulations of University as well as reminded not to engage in occultism and other anti-social activities.