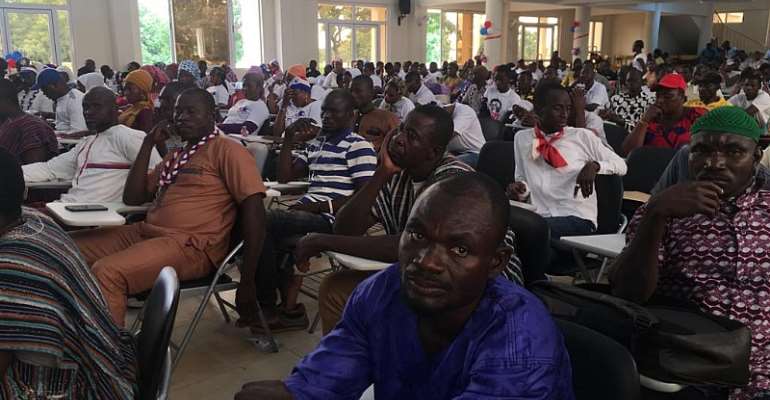 Some irate youth wing of the New Patriotic Party (NPP) in the Nandom constituency of the Upper West Region staged a walkout at the party’s Regional Youth Conference held in Wa.

The act was in protest against a decision by the organizers of the conference to exclude the name of Ambrose Dery who is the Member of Parliament for the Nandom constituency as the guest speaker of the programme which was under the auspices of the Upper West Regional Youth Secretariat.

The youth and some supporters of the NPP in the Nandom area came to the conference in their numbers in rented buses but upon reaching the Assembly Hall of the Wa Technical School where the programme was taking place, they realized that the picture of the Nandom lawmaker was conspicuously missing from the banner that featured the key speakers of the programme contrary to earlier information that the MP was going to be the keynote speaker.

He was replaced by Railways and Development Minister, Joe Ghartey.

Angered by the decision, the youth walked out of the conference, entered their buses and travelled back to Nandom. Reasons for Ambrose Dery’s absence

“We cannot understand why his name was excluded. We came in our numbers because of him so if he is not there, we have to go back. We feel it is an attempt to undermine our MP that is why we decided to leave the programme”.

The Upper West Regional Youth organizer of the NPP, Luri Tia John Bosco, expressed regret about the incident but said it was largely due to miscommunication.

“It’s an unfortunate incident but I think it’s not a big deal because this is a house matter. It is some one or two miscommunication that led to this unfortunate incident. I was around when I heard that the constituency youth organizer was leading his youth wing from Nandom to go back because they felt that I did not put Ambrose Dery’s picture on the banner that we erected for the programme.”

“Ambrose is a very important figure not only in Upper West but in Ghana. Originally he was pencilled to be the keynote speaker of this programme but two days ago I got a call from my Regional Chairman indicating that Ambrose won’t be able to come and that is why we took off his name”.

Mr. Bosco was emphatic that the decision was without malice or any attempt to undermine the Nandom lawmaker who doubles as the Interior Minister.

But the angry youth argued that even some other MPs and individuals who were invited but did not show up had their pictures on the banner.

The regional youth conference was to bring polling station, youth organizers and TESCON members together to sensitize them on how far the NPP had come. It was also to strategize on how to win the 2020 general election.