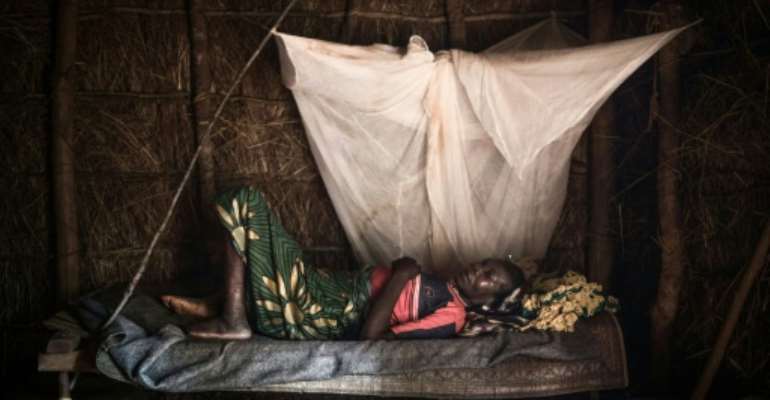 A patient awaits surgery in the hospital of the Zapai camp for displaced people in northern DR Congo. By FLORENT VERGNES (AFP)

The hospital at Zapai, a camp for displaced Central Africans in northern DR Congo, is so makeshift that patients have to lie on boards or the earthen floor as they await treatment.

Surgeon Celestin Dodouwamboli undertakes operations ranging from caesarian deliveries to appendectomies on a table covered with a blue tarpaulin and without running water.

"When I operate, I put the patients to sleep with ketamine, provided there is some," the surgeon says, adding bleakly: "There is a high number of deaths".

An aerial view of the Mbomou River, marking the border between Central African Republic and Democratic Republic of Congo, near Zemio. Armed groups isolate towns on either side with their taxes on crossings. By FLORENT VERGNES (AFP/File)

Yet in Zemio -- the town in Central African Republic that Dr Dodouwamboli and his patients come from -- modern medical equipment is available.

In better times, it would be a simple matter of crossing the Mbomou river that forms the border to have access to it.

But the crossing points are controlled by armed groups that demand the payment of fares way beyond the reach of Dr Dodouwamboli's patients.

A woman assaulted by machete gets treatment at Zemio hospital. By FLORENT VERGNES (AFP)

The Zapai camp was set up by Zande people who fled Zemio in 2017 and today number around 30,000, according to UN figures.

They fled when militia violence wrecked peaceable relations between their farming community and Fulani herders.

Groups from the onetime Seleka rebellion, a mainly Muslim force that ousted president Francois Bozize in 2013 and were later disbanded, claimed that they were defending the Fulani against "self-defence" militias formed in peasant communities.

Once the majority of the Zande people had abandoned their homes, groups such as the Union for Peace in CAR (UPC) started imposing heavy levies on all the remaining residents of Zemio.

The woes of Central African people are worsened by the Lord's Resistance Army (LRA), a notoriously cruel force created in northern Uganda in 1987. LRA rebels patrol roads to ambush convoys, kidnap farmers and steal their harvest.

Medicines at the camp pharmacy in Zapai are in chronically short supply. By FLORENT VERGNES (AFP)

Traders no longer risk visiting Zemio and farming people do not dare to stray far from town.

They all largely depend on supplies from the UN World Food Programme (WFP), which are brought on lorries from the capital Bangui.

Trucks provide a lifeline to Zemio -- they bring in supplies from Bangui, 1,000 kilometres away. The roads are so damaged and dangerous that the trip two months. By FLORENT VERGNES (AFP)

"The roads have not been repaired for more than 20 years," says a UN driver, leaning against his battered vehicle and asking for anonymity when he describes the deplorable conditions.

"The ferry at one of the rivers we have to cross can only take a 20-tonne load. When we are laden, children have to bail out the water. We nearly lost a lorry."