Calling for a Holistic Review of Ghana's Constitution 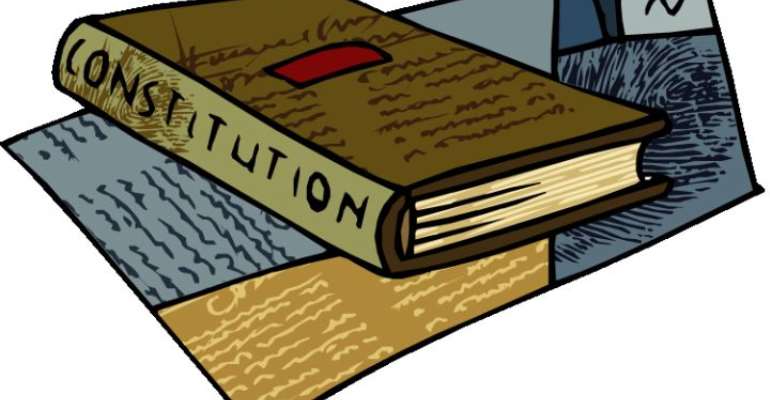 After months of cogitation about the numerous problems facing Ghana, without the country having any effective solutions in place to curb them, I have come to the conclusion that the problems with the consequential inability to resolve them emanate from the very nature of Ghana's Fourth Republican Constitution drawn up in 1992. The authors of the constitution, following whatever guidelines the proponents gave to them for reference for the draft of the constitution, have not done themselves and the nation any good at all. Therefore, in the best interest of the country and the citizens, the constitution must be holistically reviewed.

Corruption is the obvious and widely acknowledged bane of the socio-economic emancipation of Ghana by the perception of any sensible Ghanaian who has the interest of Ghana and the collective wellbeing of Ghanaians at heart. The constitution giving blanket immunity to the president from prosecution while in office, and in the course of the execution of their duties is not only erroneous but also, to extend same immunity to them after they have left office is preposterous.

For the first three years of a Ghana president leaving office, they cannot be arraigned for any offences committed while in office. This gives them the impetus to be corrupt. It empowers them not only to embezzle public funds and state assets but also, to be overwhelmingly nepotistic, to disrespect the governed, and to engage in the evil practices of cronyism, elevation and appointment of their friends, family members etc.; without due regard to the three cardinal principles that ensure the socio-politico-economic success of a country. They disregard the application of meritocracy, pragmatism and honesty in their governance hence often leaving the country always wallowing or mired in poverty and marked corruption.

The constitution by its nature as summed above, has put them at the apex of everything; making them untouchable. They seem not to be accountable to anyone. And, it is very normal for human beings to behave anyhow once they begin to feel or see themselves as above anyone without being under any obligation to any law or to anyone.

There is an exception to every rule but this does not seem to be the case in Ghana going by our constitution and the wholesale immunity it grants to our presidents. In the civilized Whiteman's country where democracy works, if a sitting president criminally breaches the law, he or she will be dealt with without even waiting for him or her to be out of office, let alone, having left office, although their constitution grants them immunity. The constitution grants them immunity in the lawful execution of their official duties but not when they stray to commit criminal offences.

There are case references to support my claim. The President of South Korea, Park Geun-hye, was impeached on 9 December 2016 and removed from office. Her impeachment was the culmination of a political scandal involving interventions to the presidency from her aide, Choi Soon-sil. She was subsequently sentenced to 24 years in prison on 6 April 2018 after being found guilty of abuse of power and coercion.

The Brazilian Senate impeached and removed the President of Brazil, Dilma Rousseff, from office on 31 August 2016, finding her guilty of breaking Brazil's budget laws. Currently, American President Donald Trump is under impeachment inquiry by the American Congress for illegally soliciting the help of the Ukraine President Volodymyr Zelensky to investigate possible corruption against his (Donald Trump's) likely political contestant from the Democrat's side, Joe Biden, for election 2020. The attitude by Donald Trump, overtly engaging a foreign country to help him win election in America through criminally tarnishing the reputation of his rival, is frowned upon by the American constitution. Subsequently, if the investigations prove credible, he can be impeached and removed from office.

The British Prime Minister Boris Johnson, is also being investigated for conflict of interest following his relationship with the American businesswoman Jennifer Arcuri. He is alleged to have facilitated her access to public funds, thus, to awards of £126,000 and free travels at the expense of the taxpayers while Boris was the Mayor of London. If he is found guilty, he can be jailed. The Israeli Prime Minister Benjamin Netanyahu is currently being investigated for bribery, fraud and breach of trust. If he is found guilty, he would be indicted, forced out of power and probably jailed.

Are the above mentioned persons not once, or are current, sitting presidents or prime ministers, of their countries? They have or had constitutional immunities but once they commit a crime, they will be dealt with. This is the beauty of democracy to ensure the separation of powers between the three arms of government (Executive, Legislature and Judiciary), to guarantee checks and balances, and to warrant the operation of laws and lawfulness but not lawlessness in a country.

Why is it that in Ghana, a sitting president or one that has left office cannot be prosecuted let alone, being sentenced to prison? How come that a president who has lost election and has nine days left to hand over to the incoming president-elect could comfortably sign a contract of 75% of Ghana's bauxite deposit to his younger brother for fifty years without the contract going for parliamentary approval as required by law, but the outgoing president and his supporters still feel the contract is legal and must stand as such?

Why are former Ghana presidents known to have committed crimes against the nation still left off the hook to continue to blow their horns; seek re-election, as though they are whiter than white? Why are we allowing the continuous existence of the seemingly porous constitution to fool us? The constitution is supposed to be made for Ghanaians but not Ghanaians for the constitution. Therefore, we have the right to amend it to suit us if it is found not to be serving the collective interests of Ghanaians but the proponents'.

Too much power has been concentrated in the hands of the president by the right of the constitution. This is not very helpful, especially when he decides to misuse it. There are so many flaws in the constitution that have given rise to most of the problems the country is going through.

Time will not permit me to cite the clauses in the constitution that need amending but any enlightened Ghanaian will bear me out that without reviewing the constitution for the better, Ghana will continue to mark time without ever moving forward. The constitution as it stands at the moment, was principally made or written taking the selfish interests of then President Jerry John Rawlings into consideration.

Ghana presidents, whether they are sitting or former, must be triable for criminal offences they commit. They should not be indemnified for such offences which are distinct from their duties. Why will they not commit crimes or abuse their powers with impunity if they knew the constitution has granted them the free licence to do whatever they want as per the indemnity clause?

It hurts to see a president or presidents who have criminally mismanaged the country still going round pointing accusing fingers at others, disrespecting the intelligence of the populace, and still trying to lecture the citizens as to what good things they have to do, if they were not wanting to stage a comeback to take over power.

Trade Minister’s promise to open Komenda Sugar factory ‘a me...
35 minutes ago