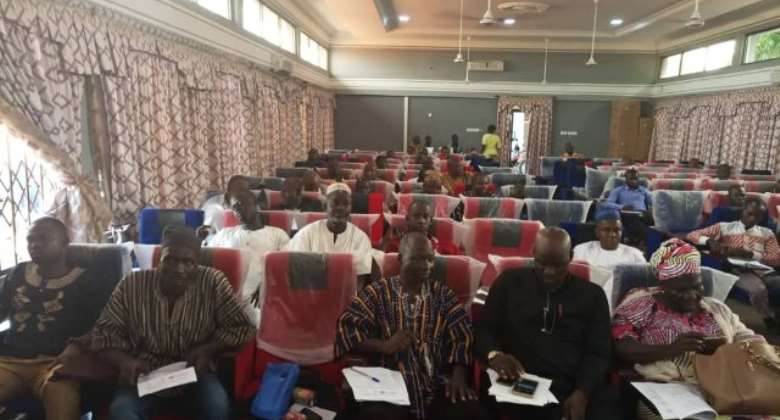 Members of the West Mamprusi Municipal Assembly in the North East Region have descended on the area police commander, following the increasing spate of highway robbery in the region.

The armed gangs according to these assemblymen, are targeting market women and other road users in their localities.

The members accused the police of corruption and failing to fight crimes and ensure the safety of residents and their properties.

The West Mamprusi municipality has recorded increasing robbery attacks in the last five years as unemployment, violent litigations, and illicit marijuana trade have fueled crimes across the Mamprugu territory. The criminals are capitalising on poor road networks in the region to attack their targets and escape police capture.

At a general meeting held to dissolve the assembly ahead of upcoming elections, the assembly members recounted ordeals of robbery victims in their communities and demanded answers for what they described as the "spread of insecurity in West Mamprusi".

Assemblyman for Kpasenkpe, Sibiam Ibrahim said robbery on the Walewale Yagaba trunk road has forced two vital markets to shutdown as traders have abandoned travelling to the communities on market days.

He said the last time the robbers attacked people on that road, some female traders were allegedly raped, beaten and heavily robbed.

Mr Ibrahim accused the police of busily mounting barriers on the roads to harass motorists for bribes instead of stepping up patrols and visibility.

His colleague for Nasia, Salifu Nasiru Adam also accused police officers of demanding bribes before attending to reports of crimes.

He recounted how an informant from his community was rather detained by the police who later demanded money for his release.

Prosper Abochi of Daboya No. 2 electoral area also accused a detective officer he identified only as Francis, of unprofessional conduct and requested the commander to take action against him.

The assemblyman said, this officer some time ago wrongly kept him in custody for several hours when he came to report a crime involving a herdsman. He suggested that police officers in the area were in bed with and assisting the criminals to operate.

Other members, including Alhassan Nasiru from Wungu-Nayilinfong and Abdul Samed of Tinguri electoral areas voiced condemnations for the increasing robbery on the roads and urged the police commander to act.

In response, the Police Commander, DSP David Noble, pushed back the Assemblymen's claims of increasing insecurity and described as unfair, some of the remarks against his men.

He said contrary to all the claims by the members, available figures showed that crime, especially robbery, has reduced drastically with no single report of attack anywhere in the last two months.

He challenged the assembly members to provide evidence of fresh attacks.

He said despite numerous challenges, such as lack of access routes and bad roads to communities, that confront the police in the area, they were still working in the extra mile to protect lives and properties as well as maintaining law and order.

The Municipal Chief Executive, Mohammed Abu, also disputed some of the claims of the assembly members and supported the police commander's assertion that crime had relatively been brought down.

The MCE said the government had provided enough livelihood opportunities for the youth but some have decided to engage in robbery instead of taking up the opportunities.

He assured full commitment to ensuring the police were well - resourced to carry out their duties of keeping the roads and communities safer.