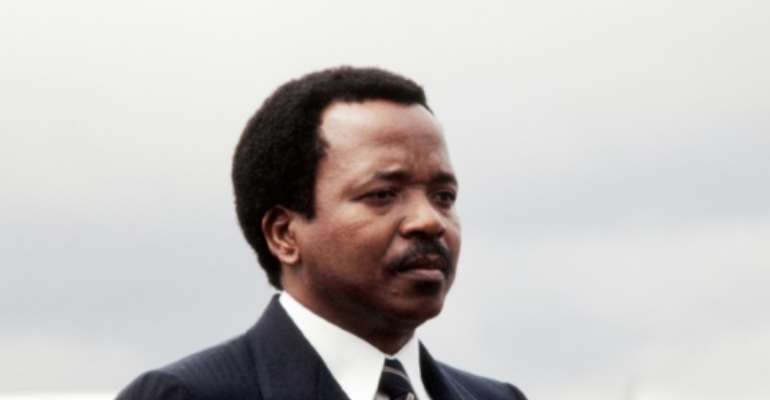 Cameroon's President Paul Biya, pictured here in 1983, has been in power for 37 years. By PIERRE GUILLAUD (AFP/File)

Cameroon's President Paul Biya on Friday announced he had ordered prosecutions to be dropped against "some" opposition leaders, including a number from the main Movement for the Rebirth of Cameroon (MRC) led by his jailed rival Maurice Kamto.

The move is the latest in a series of concessions from the 86-year-old leader, who is under intense international pressure over a sweeping crackdown on the opposition.

He is also attempting to ease surging tensions in separatist anglophone regions, with talks on the turmoil wrapping up Friday.

"I have ordered the discontinuance of proceedings pending before Military Tribunals against some officials and militants of political parties in particular the (MRC)," he said on his official Twitter account in English.

In French, he added that it affected those "arrested and detained for acts committed in contesting the results of the recent presidential elections".

He did not specify whether the decision would affect Kamto, Cameroon's main opposition leader who unsuccessfully claimed victory in elections last year.

Kamto was arrested in late January after months of peaceful opposition protests over the results of the October 2018 election. By MARCO LONGARI (AFP)

Kamto went on trial with 88 others in a military court in September on charges of insurrection, hostility to the motherland and rebellion -- crimes which could carry the death penalty. Their next hearing was scheduled for October 8.

His party also was not able to confirm details.

"I do not know if Maurice Kamto is involved or not," said senior MRC official Emmanuel Simh.

Kamto was arrested in late January after months of peaceful opposition protests over the results of the October 2018 election won by Biya, who has been in power for 37 years.

The crackdown on Kamto and the opposition has caused outrage among rights groups and many western governments.

Biya's shock announcement came on the closing day of crunch talks aimed at easing a bloody crisis in Cameroon's anglophone regions, which were shunned by the main separatist leaders.

Two areas in western Cameroon -- the Northwest Region and Southwest Region -- are home to most of the country's anglophones, who account for about a fifth of a population that is overwhelmingly French-speaking.

Two years ago, decades of resentment at perceived discrimination boiled over into an armed campaign for independence that has met with a brutal crackdown.

The president on Thursday announced the release of more than 330 people detained in connection with the anglophone crisis.

In a statement on Friday, the president's office said Biya "reaffirms his determination to tirelessly continue his efforts in the search for the ways and means for a peaceful resolution of the different crises that may confront our country".

Delegates at the talks on the anglophone crisis on Thursday adopted a resolution recommending "special status" for the English-speaking areas "aimed at strengthening the autonomy of administrative areas".

Biya has so far opposed attempts to give up centralised control.

If he backs the forum's proposal, it would mean more fiscal autonomy, the election of regional governors by locals instead of people named by the federal government and the re-establishment of traditional chiefs in the two regions.

But several separatists said they were unimpressed.

Ebenezer Akwanga, a prominent leader, said the people of self-described Ambazonia -- the country the separatists want to carve out of Cameroon -- did not "need a special status."

"We don't want to be a part of Cameroon," he said. "Ambazonia is marching to freedom and nothing can stop us."

At least 1,000 people have been detained over the past two years.