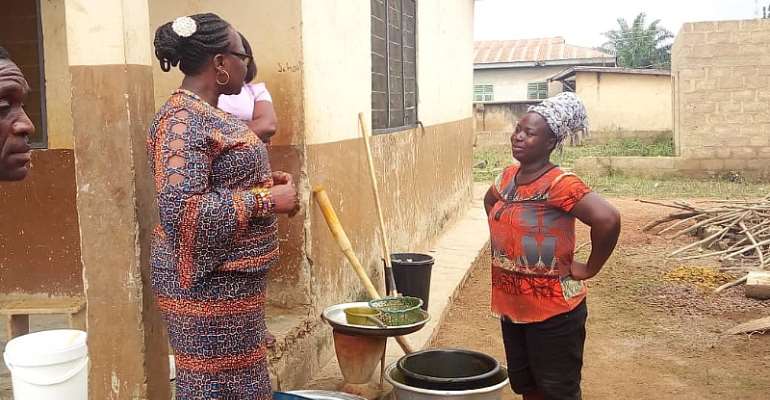 The Sunyani Municipal Chief Executive, Justina Owusu-Banahene, has visited some caterers working under the Ghana School Feeding Programme (GSFP) in the municipality to assess the quality of food being prepared by the caterers and also interact with the school children, since they are the beneficiaries of the programme.

Her first stop was the Presby Primary ‘B’ school at Abesim where she followed up on a report which raised red-flags about the unhygienic nature of the environment where some caterers prepare their foods.

“You are all mothers and I expect you to give these children, food that you will give to your children at home”, she said during her interaction with the caterers.

According to Ms. Owusu-Banahene, it is important for the caterers to be guided by laid down rules of their work and always ensure that wholesome and balanced meals are always prepared and served under hygienic condition to the school pupils.

Anything short of that, she indicated, will attract stiff sanctions which include suspension, termination of contract or prosecution.

Cooking of unwholesome food for public or human consumption is against the laws of Ghana and caterers are required to meet the standards of cooking.

The MCE said the GSFP had the basic concept of providing children in public basic schools in deprived communities with hot nutritious meals, prepared from locally grown foodstuff as part of government’s effort to attaining MDGs 1and 2 which seeks to eliminate extreme hunger, poverty and achieve basic education.

She said the health of pupils on the programme is of paramount importance and should not be compromised, adding that diseases such as cholera, typhoid fever, tuberculosis and hepatitis could spread among the pupils who are beneficiaries of the programme if care is not taken.

She appealed to the caterers to undergo periodic medical examination, saying “failure to do so would lead to the withdrawal of your services.”

The GSFP is one of the important government initiatives to encourage needy children to go to school. Under the programme, pupils in deprived schools are given one nutritious meal a day.

Covid-19 Lockdown: Jubilee House Empty As Workers Told To Wo...
38 minutes ago

Lockdown: ‘Stop Choking Market To Stock Up Food, We’re Not ...
40 minutes ago