Open Letter To Rawlings: You Can't Damage The NDC 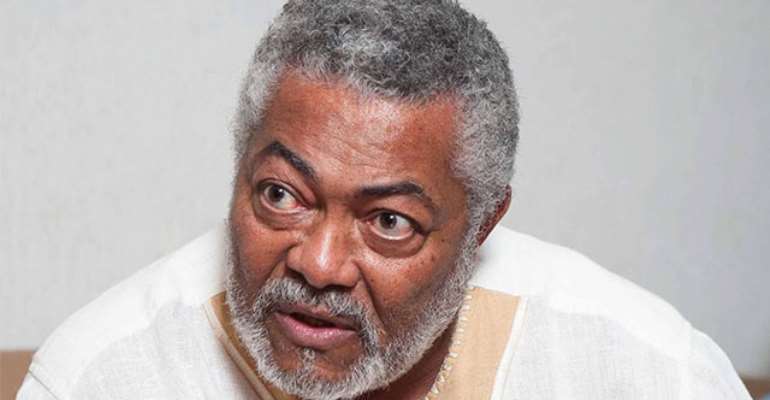 Your Excellency John Jerry Rawlings, for a few years now, l have observed you from far and near, and the more l do, the more heat l gather on my chest. I managed to contain it but it has reached its eruptive stage, and l will not allow it to paralyse me.

Your Excellency, ever since you perfectly handed over power, instead of leadership to ex-President J.A. Kufour, you never allowed him to have his peace of mind to lead this country. Your reason? Because he at a point in time tamed you from giving him 'Presidential Consultancy'. At the least opportunity, you disregarded your 'Statesmanship' and went ballistic on him. I don't like the New Patriotic Party (NPP) but l like the "Gentle Giant". Why? His tolerant and accommodative heart is par excellent. If he were the one who had done what you did to him in your reign, l doubt he would have been alive by now. At the time, l thought it was because he led the NPP and his personality you hated. But your current posture depicts the hypocrisy in you. I will come back to your current shameless flirtation with Nana Akufo Addo and the NPP.

From Kufour, came Prof. Fiifi Ata Mills. It was in his reign that hell descended Ghana. You treated the late President like 'trash' because just like Kufour, he at a point refused to rather be a 'surrogate' President to you. That was the beginning of his nemesis. A toddler's parents would have treated it with much respect than what you did him. Even after almost a decade of his demise, you have not allowed him the rest God has granted him to have peacefully.

Come John Mahama, and the situation became worst. However, and strangely so - when Nana Addo ascended the Presidency, the true meaning of "...wonders will never end..." manifested itself. Suddenly the man you never got his name right except "that Short man", gave way to reverence for him. Strangely as well, that man, too - who saw nothing good in you except a 'Coupist' and a dictator, who was not ever ready to forgive you due to the sadistic abduction and murder of the three High Court Justices and the retired army Major, now sees you - a MENTOR? I know how betrayed Kwabena Agyei Agyepong, feels since that statement was made in your Ridge office. That is why l keep believing in my belief, that descent people must at all cost avoid partisan politics. Your Excellency, my main reason engaging you, at what time you will be reading this, is the intercourse you had with cadres and the utterances made thereon. And at that meeting, you bemoaned the shabby manner cadres have been treated by the NDC. I am disgusted hearing the attribute to you, and cadres listened to you. Who is the cause of cadres lamentation of not being treated well. You remember asking cadres to take backstage because we had stepped on peoples' toes and would make the Party unattractive if we show our faces? So, after toiling to give birth to the NDC, you elbowed us out and incubated vultures to take over it, and now lamenting that people have captured the party in their pockets. Na who cause am? You now and then talk about corruption in the NDC. And you conveniently do not see the Abacha's 5 million dollars as an act of corruption? When the issue popped up, a lot believed it was a smear campaign by the then opposition. I was unpleasantly surprised when you alluded to the fact that the money did come, but it was rather 3, and not 5million as was initially impressed. If you are truly, a truthful person, why did it take you a fortune of time (about two decades) to make that confession in Wa, the Upper West regional capital on June 4, 2017, when we converged there to commemorate the June 4 Uprising of 1979. That confession made me lose respect for you. The question is, if it were any of your appointees who had indulged in this act, what would have happened to that person? And you did not know that singular act went against one of the electoral laws of Ghana? Considering your super 'honest and moral uprightness', how do you feel, the murder of Utuka for taking a Ghana Commercial Bank loan of ¢50.00?

Your Excellency, coming back to your relationship with the current President, as against your posturing with the NDC, I say ayikoo. I must say so because, if you have the capacity to forgive Nana Akufo Addo, what holds you back from doing same to your own Party. This is the man who withdrew your Protocol Privileges, which led to carrying your baggage at airports, amongst others. You were made an ordinary man in Ghana. Yet you had a soft spot for, and forgave him. After the 2016 elections when the NPP won, Lucifer still visited NDC and violently attacked, maimed some, and killed about two - one of them in Dunkwa On Offin. You definitely heard and red of them, but you never came out to condemn the atrocities. It means you were glad what happened to the very grassroot members you profess to be talking for.

Now, you have variously made statement's to the effect that the NDC can't win the 2020 elections. Your opinion has come in spite of the clear signals on the electoral grounds to the contrary. I will be addressing a comprehensive and CONFIDENTIAL write up to those who matter when it comes to considering SECURITY in the Party and what they should watch out from now till the elections are over. However, this is a signal to you, that if you choose to team up with Nana Addo to facilitate rigging of the 2020 polls, the NDC will be galvanized to rise against it. But, as l said, l will be engaging those who matter in the Party on plans to destabilize the polls and declare a State of Emergency. To cadres, l will say we tread cautiously with the former President. We underwent a kind of dogmatic orientation which was mainly due to our so-called revolution of the 1980s to the early 1990s. We are in a so-called democracy now and dogmas must give way to pragmatic appreciation of issues. No cadre worth the title should allow him/herself to be toed, conscience wise, like bullocks to a plough. We ought to know the chemistry of Rawlings, that if it is not he or the wife, no NDC person can rule this country. And it is especially so, if the person does not allow their 'inalienable right' to give him or her, the direction to govern. And Jerry and the wife's posturing would most likely affect the political fortunes of the brilliant progressing Hon. Zanetor.

Your Excellency John Jerry Rawlings, l have come to the end of decongesting the matters on my chest. But before my final word, did l hear you say the NDC does not respect our elders? Do to others, just as you wish them do you. Remember "...babies with sharp teeth? Respect is reciprocal. Truly, truly - you CANNOT damage the NDC.