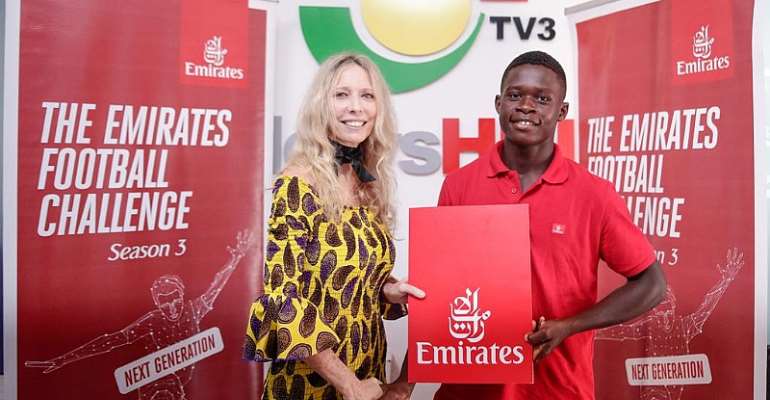 Emirates, a global connector of people and passion has announced Abu Samuel of Vision Football Club as the winner of the 3rd Emirates Football Challenge held from September 9 to September 30, 2019 in Ghana.

The first three stages were series of football trivia questions and the final consisted of questions on world football including a penalty kick off session to offer the contestants an opportunity to showcase their football talent.

Abu Samuel won the ultimate prize - two Economy Class tickets to London and the opportunity to watch a live Arsenal match at the Emirates Stadium.

“At Emirates, football remains one of the most prominent sports within Emirates’ sponsorship portfolio and understand the importance of football at a local level. We are thrilled to be taking Abu Samuel to London and experience an Arsenal match at the Emirates London stadium”, said Cathrine Wesley, Country Manager for Emirates in Ghana.

Abu Samuel expressed his excitement and gratitude to Emirates. “I am grateful to Emirates for this lifetime opportunity and the teams who competed in the challenge, it truly made me bring out my best and showcase my passion for football. I look forward to travelling with Emirates and watching a live Arsenal football match!”, he stated.

Emirates is the official shirt sponsor of Arsenal, AC Milan, Real Madrid, Hamburger SV and S.L. Benfica, and the title sponsor of the Emirates FA Cup. Emirates flies daily out of Accra to over 150 destinations in 85 countries.