A Retrospective Observation Of The Political Tranquility That Followed Prof. Atta Mills’ Death 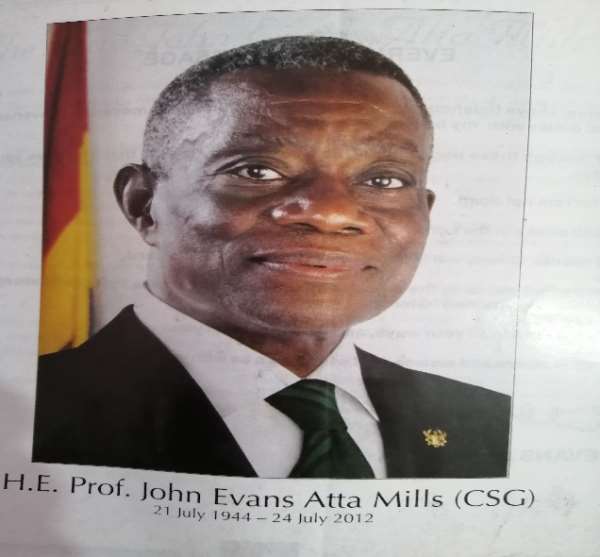 On 24th July, 2012, we heard sadly on the airwaves that Prof. John Evans Atta Mills who was the President of Ghana at the time had demised and joined his ancestors in eternity. The numerical phenomenal twist of his death was that he died three days after celebrating his 68th birthday which fell on 21st July 2012. He was born in July and he died in July (the 7th month of the year). It was as if his 68th birthday celebration was a goodbye to Ghanaians in particular and the world at large.

This article is not meant to chiefly eulogize the late Atta Mills but to cast retrospectively, an observatory glimpse at the immediate aftermath of his passing on. As a matter of fact, in the evening of Prof. Mills’ passing on to eternity, Ghana had a new President sworn into office. According to the dictates of Article 60 (6) of the Fourth Republican Constitution, John Dramani Mahama who was Atta Mills’ Vice President was sworn into office before Parliament by the Chief Justice. Article 60 (6) states, “Whenever the President dies, resigns or is removed from office, the Vice President shall assume office as President for the unexpired term of office of the President with effect from the date of death, resignation or removal of the President.” This was exactly the solemn takeover by Mr. John Mahama in the evening of 24th July, 2012 and this was the first time an elected sitting President died in office in Ghana.

The entire country went into shocks and mourning for the departed President and the funeral activities were done in unison devoid of partisan political divisions, propaganda and insinuations. All partisan political activities came to a halt. Momentarily, Ghana enjoyed political unity of place, unity of purpose and unity of time. The political tensions occurring before Prof. Mills’ death had vanished into thin air and it was as if he had sacrificed himself for peace to prevail forever.

A funeral committee was formed under the chairmanship of Mr. Kofi Totobi Quakyi and the committee did a very good job in planning and executing the necessary activities to give the demised President a befitting burial.

Until he was buried at the Asomdwee Park in August 2012, the country enjoyed a significant level of political tranquility as if there would not be political propaganda any more. The opposition New Patriotic Party (NPP) described the late President as a peaceful fellow and very tolerant to criticism and Mr. Osafo Marfo, a member of the NPP recounted his lively days with the late Prof. Mills back in Achimota School.

In their tribute to the late Prof. Mills as captured in the word/tribute version of the funeral brochure (page 86), the opposition NPP stated that their 2012 presidential candidate, Nana Addo Danquah Akuffo Addo had this to say about the demised President. “His (Prof. Mills’) contribution to Ghana’s current status as the model of democracy in Africa is appreciated.”

In paying their tribute to the late President, the Convention People’s Party (CPP) also described him as having unaffected modesty, impartial qualities, great achievements, candor with courtesy, kindness, integrity and tolerance.

Life on earth is a complex picture with various perspectives to it especially within the vehement and vilifying political atmosphere of our time in Ghana. Yesterday you were scolded, sharply criticized and painted negatively yet in death, you will be praised as if you were angelic. Is it pretense or it is a refrain from criticizing beyond the grave?

To the dismay of many watchers of the political scene, the tranquility the country enjoyed immediately after Prof. Mills’ death gave way to the usual animosity, propaganda, sharp criticism, disunity and the partisan vilification after the burial. These were people who assembled in unity at one place and had a funeral ceremony for a departed hero yet they were at one another’s throats again after the burial and the trend continues till now as I am writing this article.

So when shall the politicians in Ghana become nationalistic and work in unison in the interest of the country? Such togetherness we see in America and the UK regarding national issues and irrespective of one’s partisan political leaning is what we need in Ghana. We must unite to develop our neck of the woods. The UK Parliament has been discussing BREXIT and their decision is not influenced by parochial partisan politics as we often see in Ghana. Those who have objected to the BREXIT are both from the Labour Party and the Conservative Party even though the latter is the party in power. This depicts political maturity which is worthy of emulation by Ghana.

In Ghana, perhaps we need apply Chris Argyris’ Immaturity-Maturity Theory to grow out of the political immaturity arena to the realization that being my political opponent does not mean we are enemies to each other. Also, that the President is of my political party should not be a guarantee that I must agree with and support all his ideologies especially those that are not in the national interest.

I think that Ghana pretends to be practicing democratic governance. It is often not clear which political party is truthful. Lies are told just to win elections. Perhaps the most nauseating aspect of the political game is that whenever party A comes to power and it has completed a project started by party B (the previous party in power who are now in opposition), the opposition party B discredits the party currently in power (party A) for being visionless and only taking credit for what others started. The flip side is that whenever part A neglects the projects started by the opposition party B, the opposition party again criticizes the party in power for not continuing the projects started by their opponents. If this baseless criticism and ingratitude game is not an incessant attempt to toy with the lives of the masses, then what should it called?

So long as we do not move away from the acrimony, mere propaganda, describing white as near white and the political vilification, we will continue in the jungle of seeking for development until we are colonized again. The tranquility that prevailed after Prof. Mills’ death should have been nurtured jealously for our collective gain as a people. But alas!!! That had also eluded us and we are far more polarized now than ever before.

Constructive criticism with progressive and acceptable recommendations are not bad because they serve as synergic factors necessary to propel development. No one political party can move Ghana forward. We need a team work approach to do that. Our political leaders and even the masses should stop coming together only in times of funerals and mutual benefits and be nationalistic in thoughts and actions. In the whole world, there is only one county called Ghana which we call ours so we must cherish it and work in unison for its sustainable development. Most sustainably developed countries around the globe move with strategically measured steps and that is what we need to do. We hope that even as we about to enter another election year, peace will prevail in the country. Prof. Mills, may your gentle and peaceful soul continue to rest in the bosom of the Lord God and till we meet again, God be with you. ~ Asante Sana ~