...At The Launch Of Upper West Students' Union Action Plan
By Raphael Derbie 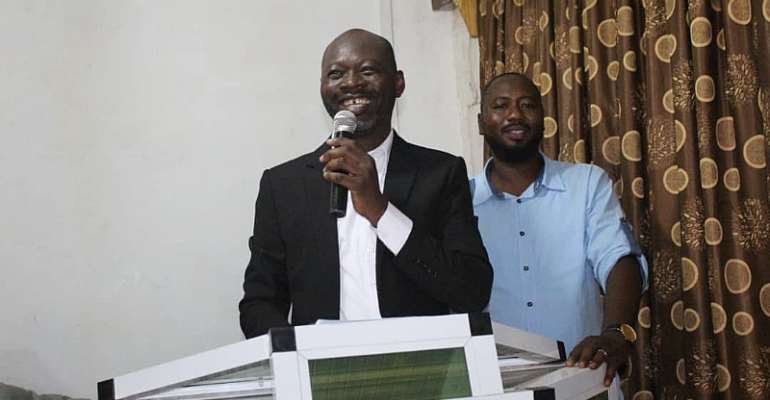 The Upper West Students' Union-National led by the dynamic and smart young man, Mr Joseph Banye, launched their action plan for the year 2019. The theme for the programme was "Bringing Forces Together To Rejuvenate The Students Front Of The Upper West Region". It was a power-packed and electrifying programme that was well attended by students across the region.

The president of the union Mr Banye Joseph delivered a powerful speech anchored on the falling standard of education debacle in the region. Mr. Joseph Banye is a brilliant dynamic young man who has demonstrated exceptional leadership skills. He distinguished himself with his fantastic organisational skills that filled the Wa Municipal Assembly Hall with students, something that has never happened according to the patrons.

He said, "Mr. Chairman, there is no denying fact that the educational problems of yesterday are different from the educational problems of today as far as Upper West Region is concerned hence the urgent need for the higher authorities in the Region to shift attention towards a development-oriented Students group like the Upper West Students' Union-National to offer voluntary and auxiliary services to augment the output in the years to come as far as education in the Upper West Region is concerned. It is not too late to make more significant progress in the Educational output in the Region if we form a conglomerate of all agents of educational development including our union".

The president also mentioned some of the activities they intend to undertake within the year to ameliorate the education debacle in the region that will certainly reflect in subsequent performance. He said, "...the executive board have come out with a list of activities that if implemented will pose a great positive challenge to all well-meaning Students from the Upper West Region which will go a long way to helping the educational development of the Upper West Region.

The union have put together activities such as Free vacation classes, Health walk/ clean up campaigns to enhance our general wellbeing, quizzes for both junior and Senior High Schools, UWESU farms and above all the prestigious Garibanye awards to appreciate Students who distinguished themselves in academics and other creative discoveries".

He then called on the authorities to support them to realised this dream. This, he intimated, "...I wish to state that without the support of the entire membership, Patrons, and the political and business classes of the Upper West Region, we cannot bring our dream to reality".

The guest speakers added colour to the programme with their powerful speeches. A very passionate and touching speech was delivered by Mr. Sulemani Mumuni, famously known as Senior, an officer in charge of operations at the office of the National Youth Authority. He started his speech by asking some brilliant rhetorical questions.

1. Where are all the great scholars from our region?

4. How many of our leaders can come back to the region?

The questions he asked sent some signals to our leaders and the entire members of the region. He spoke the unspoken truth, "we are where we are because we do not pull one another along". He added that "we are our own enemies always pulling one another down". He said, "some of the youth during the mentoring process, always want to bring down their mentors so that they can take over and be in charge of everything". This, he said is the reason why Upper Westerners at the top hesitate to pull along one another. He added that we appear to be too knowing and that is not good for us. Mr. Mumuni, therefore, advised the youth to add value to themselves and always be gentle in our appearance. He admonished leaders of the region to sponsor some of the students to study abroad so that they can come back and serve the region. He advised the youth to prepare to take advantage of opportunities.

Furthermore, the chief patron of the union, Mr. Alhaji Saeed Salih, cautioned the youth to develop ourselves before joining politics. He said, "you need to develop yourselves before you enter into politics. If you are better placed before entering politics, you will be able to survive but if you rush into it, you may be crashed out". He again lauded the effort of the current executives for the fantastic organisation of the programme. He also charged the youth, in general, to take charge of the development of the region because the current generation has failed us.

In addition to that Dr Godfred Saidu Jasaw, a UDS lecturer and the NDC parliamentary candidate for Wa East, spoke vehemently on rebranding the union. He raised lots of legitimate issues that the union is not doing and that has almost rendered the union non-existent.

He said, "the loud silence of the union on certain pressing issues in the region is not helping the region. UWESU is the only neutral group that can chat a non-partisan path of development by speaking out on issues using both local and national media outlets". He again added that it is only this union that can bring all the politicians together on a common platform to listen to the real issues on the ground.

He, therefore, called on the union to let its voice be heard on some happenings in the region for it is one of the best ways the union can be more vibrant and effective in the development of the region.

The National Youth Authority director for the region, Mr Archibald Donko, passionately advised the youth in the region to do away with sectionalism and factionalism in the region. He said, "I want to use this opportunity to advise the youth to desist from standing in blocks as in Dagaabas, Sisalas, Waalas, etc. It will not help you if you sincerely want to develop as a region".

Mr. Titus Polkuu, the Regional Deputy Youth Organiser of NDC in charge of operations represented the NDC at the programme. In his speech, he expressed his unhappiness in the complete absence of the ruling party, NPP at the programme.

He said, "the NDC is a political party that does not sleep when it comes to education in the country. Education serves as the lubricant that facilitates the movement of the country in terms of development. It is in this regard that the NDC gives attention and support to serious neutral groups like UWESU to contribute its part to uplifting the standard of education in the region and the country at large.

It is indeed sad that at a neutral platform like this where I think all political parties more especially the NDC and NPP would have been present to take part in this all-important activity that is geared towards the improvement of the falling standard of education in the region, we have only the NDC being present. Is it that the falling standard of education in the region is of less importance to the NPP in the region to the extent that they failed to send a representative to this important programme? This is very sad and bad precedent which must be condemned in no uncertain terms". Mr. Titus also advised the youth to be humble enough and not be in a haste to assume the position of knowing more than our mentors during the mentoring process.

The guest speaker for the programme, Hon. Dr Sabastine Sandaare, Member of parliament for Daffiama Bussie Issah(DBI) constituency who is the best performing MP according to the KNUST survey conducted in 2019, reveals the secrete behind his success. He happens to be the only member of parliament who attended the programme out of the eleven MPs in the region.

Hon. Dr Sandaare, the best performing MP narrated his ordeal and why he does things differently. According to him he was one of those children who struggled to be educated and gets to where he is now. He stated, "I went through hell to be where I am. I was one of the poorest students you could find in the country. The way I suffered to get to this level is the more reason why I do things differently from others".

He said his people gave him the power to serve them so he does not see why he should neglect them. He added that the education of his people is one of the best ways of giving back to society, the reason why he prioritized education in his constituency, DBI.

Hon. Dr Sandaare admitted that students from his constituency help him a lot and that is why he is at where he is now. He said, "I get a lot of help from the students in my constituency. They give me lots of good ideas, suggestions and plans regarding the way certain things should be done. I do also get good ideas from a programme like this and that is why you will always see me in programmes of this sought to pick intelligence and share my experience to ginger the youth to keep pressing on irrespective of the challenges. The KNUST survey that rated me as the best MP was not by my own effort but by the contributions of students in my constituency. So the credit goes to my constituency students".

Hon. Dr Sabastine Sandaare told the students why people see him as different from his colleagues. He said, "I do not see why I should ignore a student from my constituency whose efforts to get money from his or her parents or guardians to pay fees or buy education materials have proved futile. I can not ignore such a student. Where else do I think he or she can get the money to pay his or her fees. This is the reason why my personal account is always empty. I push all my money into my social investment account which I use in supporting students and executing other equally important projects in the constituency".

Hon. Dr Sandaare again made a very touching statement which has some Biblical allusion and is worth emulating. He stated, "I use the little that I have to support my people and continue looking for more. I do so because if you are always waiting to have enough before you help others, you will never have enough". Indeed, the interventions of Hon. Sandaare is enough a justification why Daffiama Bussie Issah is not part of the ten (10) worst-performing districts in the 2018 Districts League Table for the BECE performance.

Hon. Dr Sandaare also called on the youth to show commitment in the development of the region. He narrated how he fought to come back to the region to serve his people. He said, "As a medical doctor, I one day, bravely wrote a letter to my boss telling him that I wanted to come back to my region and serve my people. My boss did not deny me my wish but instead of posting me to the Upper West region, I was posted to Upper East. I again wrote a letter telling them that I did not say the Upper East region but Upper West. So they had no option than to repost me. That is how come I was brought to the region to serve and God being so good, He elevated me to this level to continue to serve my people".

The chairman for the programme, Mr Alhaji Abu D. Kuntulo, gave his closing remarks recounting and reiterating some salient points made by the various speakers and also called on the youth in the region to change our attitude towards the abuse of drugs such as tramadol and other dangerous substances. He also advised that the youth respect and recognise their leaders. The programme was indeed a power-packed one that rejuvenated the youth to rise up and move the region forward especially on the part of education.