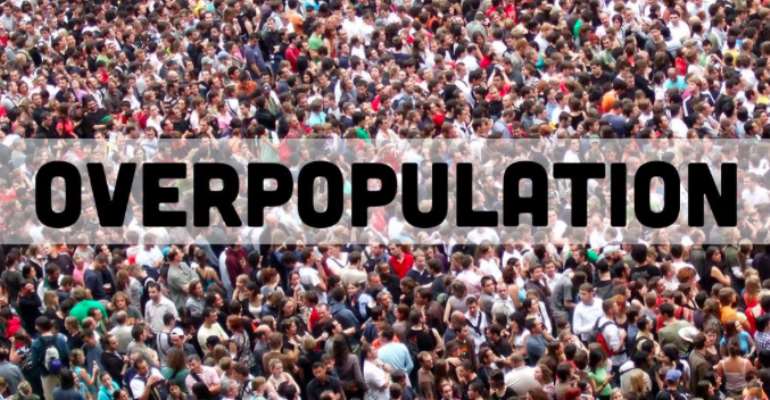 The most pressing and prominent problem facing the destruction of mankind is overpopulation, coming in disastrous dimensions in coming years. Climate Change aspects are part of it and come in second place. The ongoing xenophobic attacks in South Africa, Blacks against Blacks based on citizenship powered by economic problems, is a clear alarming signal of what is about to happen in Africa.

The question is obvious, why does the aspect of Climate Change have such a prominent place in our life today as seen by mass demonstrations around the world on September 20th of this year? Climate Change is a technical and economic problem that needs political answers and actions...that is all...simple to achieve! The young girl from Scandinavia, Greta campaigning on a sponsored economic platform to make people around her prominent and rich, should be seen as what she is, an instrument that is pushing mankind further away from solving mankind's number one problem, overpopulation. Instead of praising her actions, they must be condemned and seen as a dangerous destructing result of a confused and unsubstantive mind. Energy, financially, emotionally and intellectually, gets diverted into a road that is part of a bigger picture globally. It gets pushed to the wall and hangs there as a pictural reminder only of what should be standing in the center of our daily life.

Careful observers can see this campaign mostly take part in the developed world that in fact is not so much affected by Climate Change, like the underdeveloped world, especially in Africa. Their voices are not as loud as in our white societies. Is that not symptomatic for the Whites that want to divert the much-needed attention away from the real problem facing mankind?

They play into the hands of the wicked politicians from all sides of the race spectrum in so many countries. They feel encouraged to be silent on the most pressing problem to mankind and find a solution to manage the upcoming disaster.

The Blacks do not want to confess they have failed themselves (Dr. Kwame Nkrumah, first President of Ghana in his Independent Day speech 06.03.1957: "When the black man is finally free, he can manage his own affairs.") and Whites fear going down the path of effective help that could make them potentially look like old Colonial minds again; while most Blacks want to benefit from the mind of the White Man as long as they will not become an Annex to a certain state and get exploited once more. The everlasting power struggle between Blacks and Whites has reached a very sophisticated level where only open, honest and powerful ideas and actions can turn the table and avoid preventable harm to mankind.

Over Population is a moral and political issue that needs answers and actions...much harder for most people and leaders to address. The question arises: Why? Simple answer: moral aspects and a dark history of mankind to take forward into the future on a better, a higher level needs to be addressed and put into action. Basically it all comes down to the core of mankind and its development that lays in the constant balance of dominion over the world between Blacks and Whites. Out of this underlining conflict, everything we see around us on a social, cultural, economic and political level has emerged and plays out the balance between the two opposing races.

As the human race comes from Africa, all people around the world are Blacks, many of them turned into Whites. Like the devil is a fallen angel from God´s amada of angeles, the Whites separated themselves from their origin; equipped with a mind that is not based on JuJu, witchcraft (an experience, not a system) rather on religion that is a system able to learn constantly and come up with inventions all the time, the White Man took dominion over the earth away from the original owner, the Black Man. Standing intellectual naked, the Blacks complain about the wicked mind of the Whites while at the same time wishing to have the mind of the White Man without the inherited problems he has encountered over the generations but stand tall on earth as a renewed human being that, rather with a clean heart, progressively changes the agenda of mankind making our lives look more in line to create a paradise for all.

What it takes are strong-minded people on both sides of the colour race discussion, to confess Colonialism was a mistake to learn from and improve and that modern exploitation of Africans is the modern face of Colonialism through the back door with Black Leaders not aware of how much their nations get messed up. It also needs the confession the White Man does not want to raise in any way a competitor that over generations to come will dominate him in all aspects of life, economically and politically as well as socially and culturally. The upcoming Over Population has the historic chance to change the agenda once again and turn back the dominion wheel into the hands of the Blacks. Whites enjoy the mess on the African continent realizing that promotion of the wicked mind haunting Africa by its own people helps them to stay on top of Blacks and enjoy happiness for their own people for generations to come.

The short-sighted mind of Whites in this regard will in 4-6 generations to come fall back on them disastrously as precious time will have been wasted to sit down and come up with a new concept of humanity willing to accept the dominion of the Blacks over the Whites and implement the best possible scenario for both races to live effectively on earth; and use this special momentum in the history of mankind to lift human race up onto a higher level.