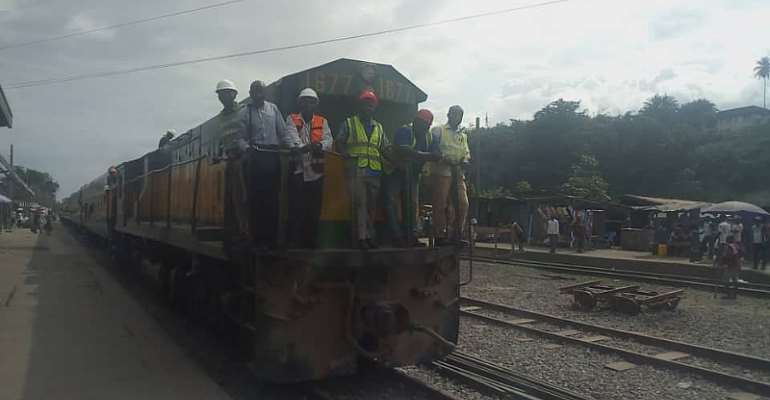 In what appears to be impossible for thousands of rail transport patrons due to its collapse under the erstwhile NDC administration has been a thing of the past since the assumption into office of H.E Nana Akufo-Addo as President of Ghana and Hon Joe Ghartey as Minister for Railways.

Expectant residents of the Western Region, particular of the Tarkwa-Nsuaem Municipality could not hide their joy upon seeing the ten passenger train coach arrived at the Tarkwa railway terminal on Tuesday, September 17th, 2019.

The reason is that, the Ghana Railway Company Limited (GRCL) on Tuesday, September 17th begun a series of test runs on the Kojokrom-Tarkwa section of the Western Rail lines. The successful completion of the test run will certify the safety of the lines for shuttle or passenger train service. The officials and passengers on the coaches were received by the Municipal Chief Executive, MCE for Tarkwa-Nsuaem Municipality, Hon Gilbert Ken Asmah.

It would be recalled that the sector Minister, Joe Ghartey issued a caution to the management of the GRCL in August this year to complete rehabilitation work on the Kojokrom- Tarkwa Rail lines by end of this month, lest suffer the consequences.

This might have gotten the company to expedite work in fulfilment of the deadline.

[Hot Video] Shatta Wale vim dies as prisoners hoot at him in...
57 minutes ago