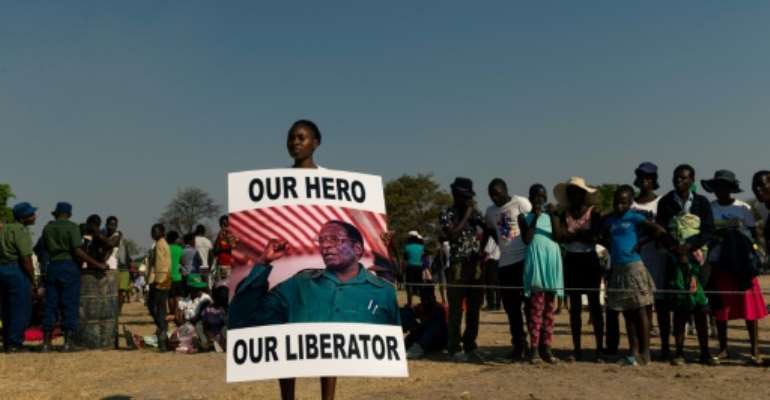 Mugabe's body was greeted to a low-key farewell in his home village. By Jekesai NJIKIZANA (AFP)

The remains of former Zimbabwe president Robert Mugabe, who died on September 6, arrived in his home village on Monday for a subdued farewell at a dusty sports field after a weekend state funeral with African leaders in the capital.

Mugabe, who died aged 95 on a medical trip to Singapore, stayed in power for nearly four decades until a 2017 coup ended his increasingly autocratic rule.

His death has left Zimbabwe deeply split over the legacy of a man once praised as an anti-colonial liberation icon, but whose regime was defined by brutal repression and economic chaos.

He was given a state funeral on Saturday, but the return of Mugabe's body to his place of birth northwest of the capital was a low-key event.

The brown coffin with silver trimmings was placed under a small white tent surrounded by marquees sheltering about 1,000 people. Another 1,000 had gathered in the midday sun at a business area about 10 kilometres (six miles) from Mugabe's homestead.

Led by Mugabe's two sons -- Robert Jr and Bellarmine -- hundreds of villagers filed past the casket surrounded by wreaths of white flowers.

"He has left a void, a big void. It's a gap that no one can fill," Mhedziso Chibatamoto, 44, wearing a red and grey tailored shirt with a portrait of Mugabe.

A young woman waved a giant poster of Mugabe's portrait with the caption "hero".

A group of women placed in front of the VIP area four clay pots and a calabash gourd, part of local funeral rites.

Before the cortege arrived, mourners were handed shirts, scarves and other clothes bearing images of President Emmerson Mnangagwa, a former long-time ally who turned against Mugabe in his 2017 ouster.

That sparked an angry response from some. One unidentified ZANU-PF ruling party official took the microphone, complaining it was not a rally.

His death has left Zimbabwe deeply split over the legacy of a man once praised as an anti-colonial liberation icon, but whose regime was defined by brutal repression and economic chaos. By Jekesai NJIKIZANA (AFP)

"It's wrong. This is about Mugabe," said local resident Nhamo Mashonganyika, who donned a red beret with Mugabe's portrait on front.

Many Mugabe family members are bitter over his ouster and the role played by Mnangagwa, who was elected president soon after Mugabe was toppled.

Mugabe had fired him as vice president in 2017, in what many saw as an attempt to have his wife Grace Mugabe succeed him. That prompted protests and army pressure that eventually forced Mugabe out of power, part of a broader split in the ZANU-PF party between Mnangagwa's faction and Mugabe loyalists.

Mugabe's final burial was also caught up in dispute between his family and the government. But they finally agreed he would be buried in about 30 days in a national monument once a new mausoleum is built for him.