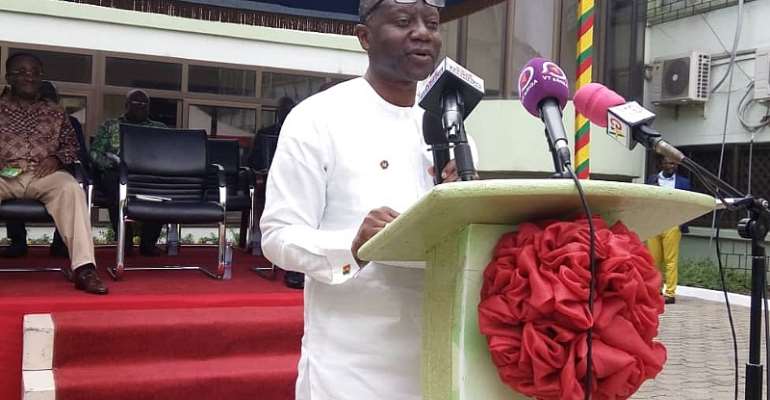 Finance Minister, Ken Ofori-Atta, has launched the 2019 edition of the national farmers day celebration in Accra.

This year’s celebration, the 35th of its kind, would be held in Ho, the Volta Regional Capital.

Farmers from the remaining 15 regions would participate in the celebration in December.

The 2019 celebration is under the theme: ‘Enhancing Small Scale Agriculture Towards Agribusiness Development.’

The occasion would be used to award farmers and fisher folks who have worked tirelessly to contribute the growth of the Ghanaian economy.

Speaking at the launch on Wednesday, September 11, 2019 in Accra, Mr. Ofori-Atta observed that farmers and fisher folks were the backbone of the Ghanaian economy.

He said Government would continue to work hard to safeguard agriculture.

According to him, Ghana has the potential to produce food to supply the whole of West Africa and still have surplus for exports.

But that, he said, could only be achieved through innovative means such as the flagship Planting for Food and Jobs (PFJ).

He said over the last two and half years, Government has invested an amount of $1.4 billion into the PFJ scheme.

Through hard work, according to him, the New Patriotic Party’s administration has been able to increase growth from 3.6 percent in 2016 to 6.1 percent in 2018.

That notwithstanding, he said, Government recognized that Ghanaian farmers and fisher folks still had some challenges that needed to be addressed, adding that Government sees agriculture as a catalyst for economic growth.

Minister of Food and Agriculture, Dr. Owusu Afriyie Akoto, explained that “…the Government of H.E. Nana Addo Dankwah Akufo-Addo continues to prioritize agriculture and demonstrate a firm commitment to the

improvement of the sector.

“This became evident within the

Goaso, now the Regional capital of the newly created Ahafo

He noted that the action by the President, signaled the dawn of

a new era of Ghana's Agriculture, after a period of decline and uncertainty.

He said Government would continue to invest in agriculture.