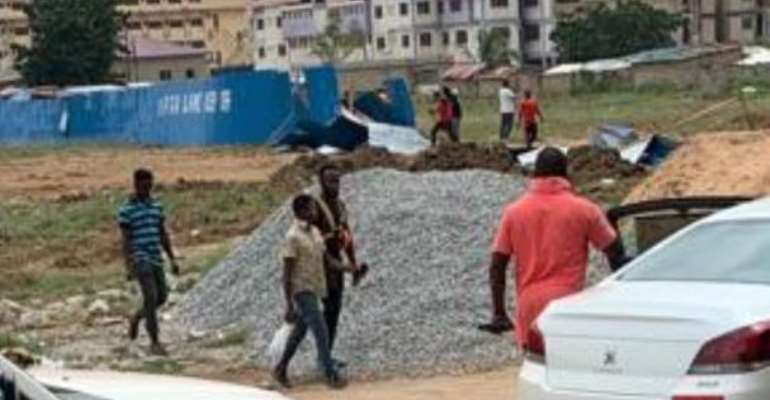 Ministry of Lands and Natural Resources has denied employing the services of one Clement Gyato to reclaim government lands on its behalf.

Mr Gyato, who claims he has been contracted by the Ministry of Lands and Natural Resources, has allegedly been terrorizing residents in some parts of Accra, with the help of land guards.

The self-acclaimed contracted staff of the Ministry was on Wednesday called out by landowners around the University of Professional Studies in Accra after he led a team of military men and land guards to pull down their structures.

But in a Citi News interview, Public Relations Officer of the Ministry, Abraham Otabil insisted that the Ministry did not have a working relationship with Clement Gyato and will adopt every means to ensure that the matter is settled in the appropriate manner.

“The Land's Minister has not hired a land guard to undertake any exercise. For us, we are a ministry of a noble and any transactions we go into, we make sure we do it on behalf of the good people of Ghana. So, we want to reiterate the claim that, the Land Minister has not contracted a contractor called Gyato to hire land guards to undertake a demolishing exercise. We will not look on for that to continue. The Ministry will look into the matter and ensure that there is sanity in the system. Because, the lands sector has to do with regulations and we have the responsibility over land transactions in the county.”

UPSA's tussle over land leaves one person in critical condition

A tussle over a land supposedly acquired by UPSA left one person in a critical condition on Wednesday after he was run over by a car.

According to the university, some persons suspected to be land guards were seen destroying an aluminium sheet fence around the land.

The Head of Legal Services for the university, Fortunate Fio in an interview with Citi News, argued that the land had been registered in 2006 hence the university is determined to protect its property despite the threats.

But the man accused of being a land guard has refuted the tag arguing that he is a government official tasked to reclaim state lands.

“I'm in charge of government lands reclamation. This is a state land acquired by an executive instrument. I'm in charge to identify and reclaim any state land that has been acquired and has been encroached on by individuals and organizations.”

He alleged that UPSA is not a legitimate owner per the search in Land Commissions' records hence they were encroaching on a government's land.