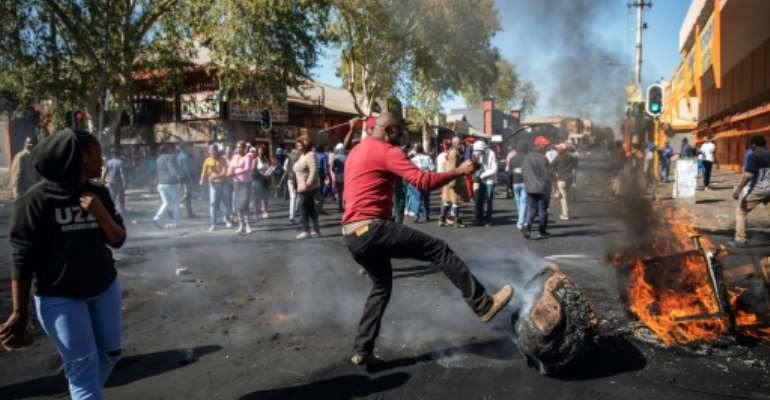 Five people have been killed in xenophobic violence in South Africa, police said on Tuesday, as President Cyril Ramaphosa vowed to clamp down on the attacks and the African Union and Nigeria sounded their alarm.

Hordes of people -- some armed with axes and machetes -- gathered in Johannesburg's central business district (CBD) for a third day of unrest directed against foreigners, hours after mobs burned and looted shops in the township of Alexandra, prompting police to fire rubber bullets to disperse them.

Five deaths -- most of them South Africans -- have been reported, police said, adding that 189 people had been arrested.

In a video address diffused on Twitter, Ramaphosa said attacks on businesses run by "foreign nationals is something totally unacceptable, something that we cannot allow to happen in South Africa."

"I want it to stop immediately," said Ramaphosa, adding that the violence had "no justification."

Sporadic violence against foreign-owned stores and enterprises has a long history in South Africa, where many locals blame immigrants for high unemployment, particularly in manual labour.

The country is a major destination for economic migrants from neighbouring Lesotho, Mozambique and Zimbabwe. Others come from much further afield, including South Asia and Nigeria, Africa's most populous country.

But this week's assaults seem to have been on a greater scale than in the past, although the full details remain unknown.

"They burned everything," Bangladeshi shop owner Kamrul Hasan, 27, told AFP in Alexandra, adding that his shop gets attacked every three to six months.

"All my money is gone. If the (South African) government pays for my plane ticket, I will go back to Bangladesh," he said.

Alexandra, one of the poorest urban areas in South Africa, is situated just five kilometres (three miles) from Sandton, the city's gleaming business and shopping district.

More than 90 people were arrested on Monday in connection with the violence and looting of shops in Johannesburg and surrounding areas, the government said.

Similar incidents occurred in the capital Pretoria on Monday, when local media reported shacks and shops burning in the Marabastad -- a central business area largely populated by economic migrants. 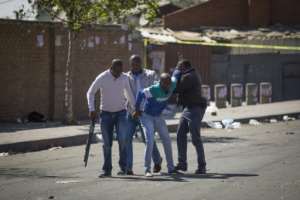 South African police officers detained looters after the outbreak of rioting in the Johannesburg township of Alexandra. By GUILLEM SARTORIO (AFP)

Nigeria summoned its South African ambassador to express "displeasure over the treatment of her citizens" and dispatched a special envoy, who is expected to arrive later this week.

Separately, African Union chairperson Moussa Faki Mahamat condemned the violence "in the strongest terms" but said he was encouraged "by arrests already made by the South African authorities".

The attacks on foreign stores began a day after South African truckers started a nationwide strike to protest against the employment of foreign drivers.

On Monday, they blocked roads and torched foreign-driven vehicles in parts of the country.

At least another 20 people were arrested in connection with those attacks in the southeastern province of KwaZulu-Natal. 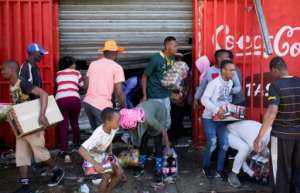 Looters stole items from shops they believed to be foreign-owned during a riot in a Johannesburg suburb. By GUILLEM SARTORIO (AFP)

"We are a nation founded on the values of ubuntu (humanity) as espoused by our founding father, President Nelson Mandela... we should always resist the temptation of being overwhelmed by hatred," he said at a meeting with ministers in Cape Town on Tuesday. 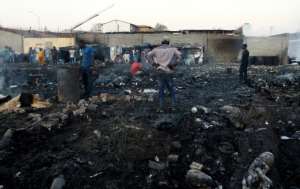 The violence has erupted on the eve of the World Economic Forum on Africa in Cape Town, where hundreds of political and business leaders will gather for three days. By Phill Magakoe (AFP)

The violence erupted ahead of a meeting of the World Economic Forum on Africa in Cape Town, where hundreds of political and business leaders will gather for three days from Wednesday.

David Makhura, the premier of Johannesburg's Gauteng province, said rioting was not a solution.

"This issue can be dealt with without resorting to xenophobia," Makhura told reporters. "There is no country that does not have foreign nationals".

"South Africans are scared and lack real hope for the future," said Mmusi Maimane, leader of the Democratic Alliance, South Africa's official opposition. "We are seeing economic and social collapse in action."

Ramaphosa took office after elections in May that he won on a platform of reviving the country's economy and boost employment.

But in July, the national statistics office said joblessness had reached 29 percent -- the highest since the country's quarterly labour force survey was introduced 11 years earlier.