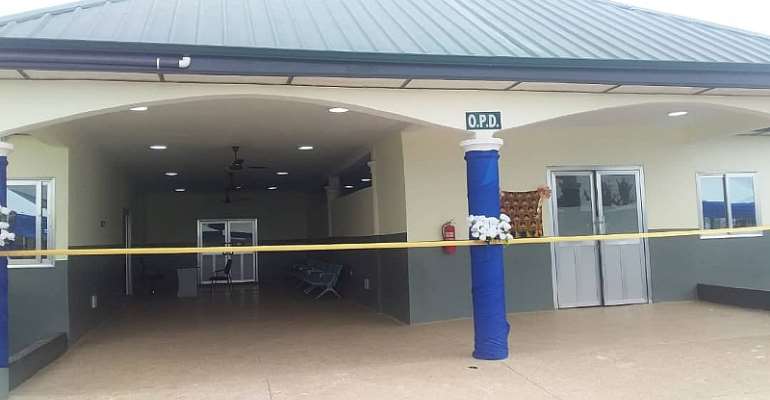 The chiefs and people of Chiraa in the Sunyani West District of the Bono East region are full of praise for one of their very own Obed Asante after commissioning an ultra-modern Emergency Unit and Theater center for the Chiraa Health Center.

At a short but colorful ceremony on Friday, the Omanhene of Chiraa, Barima Minta Afari II could not hide his joy seeing the new facility which cost about GH900,000 saying it is a great source of relief for his people.

He was also full of praise and commendation for Mr. Obed Asante, the Chief Executive Officer of Ghana Nuts Company limited in Techiman who sponsored the construction and equipping of the new facility.

He expressed great hope that with the construction of the ultra-modern facility which will be of great help to not only the people of Chiraa but all surrounding districts, the government will see the need to upgrade it to a District Hospital.

''We in CHIRAA are honoured to have Obed Asante supporting the health of our residents by sponsoring many projects in this health center including the provision of an ambulance and this new emergency unit and we know more of such support for this place will eventually lead to it becoming a district hospital'' the Chief posited.

Even though the Chiraa health center is between Techiman and the Northern regions, a route known to be prone to accidents, the center is unable to attend to many emergency situations due to its status, coupled with a lack of medical equipment to make their works easy.

The new facility which also has an OPD and two monitoring devices to enhance the diagnosis of illnesses also has two consulting rooms, anaesthetic machines, stretchers, wheelchairs surgery beds and severally specially ordered equipments to give it an international class of an emergency center.

The Medical Superintendent at the Chiraa Health Center Dr. Derick Kumi Frimpong called for the adequate and proper installation of health equipments at various health centers across the country.

Doctors in Ghana, he lamented, are made to overly use their brains in a lot of areas in the field while some simple machines could make their work easier and save the lives of many patients.

Lauding the efforts of Mr. Obed Asante, for the great support to the facility, he called on other benevolent citizens and organizations to emulate his patriotism and kindness.

Speaking at the function, Mr. Obed Asante, sole financier of the project said having suffered to get treatment for a broken hand at an early age at Chiraa he decided to do all he can to support hospitals when he had the opportunity.

He stressed that the health of residents was the most important thing to him and that was why he was committed to help and resource health centers across the Bono East region.

'' My commitment to this community and many others in this region is to ensure people have access to good health care at comfortable environments and what I hope to get in return is to see authorities maintain these facilities as they keep them in good shape at all times'', Mr. Asante noted.