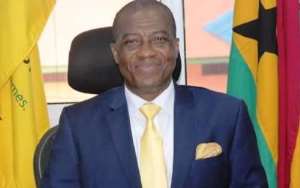 According to the Ghana Lotto Operators Association (GLOA), the NLA’s current Director-General Osei Ameyaw is extorting monies from private sector operators running into several millions of Ghana Cedi to provide them with the license to operate banker-to-banker lotto using the NLA draw numbers.

During a press conference in Accra the group asked Government should immediately investigate the Director-General for all monies collected by NLA from private sector operators (GLOA) and refund same to operators. These funds and systems/machines were unlawfully taken under fraudulent pretenses.

Also the Government should interdict the Director-General and Sales Director of NLA until the issues are fully investigated and proper sanctions applied.

Read Below their full statement
Good Morning, Ladies and Gentlemen of the Media, we have invited you here today to present urgent matters which seek to undermine our lotto businesses and deny us our livelihoods as Ghanaian citizens.

The two issues for this press conference are:
1. NLA’s collection of illegal fees from private sector operators to operate Banker-to Banker Lotto using the numbers drawn by NLA.

Private sector participation in the lottery in Ghana is not a recent development. The private sector has proven itself as a viable partner in national development under several governments past and present, especially as providers of alternative employment to many Ghanaians, significant contributors to national income, and facilitators of development through employment generation at the District level.

The benefits of the private sector operating as a partner to the government was encouraged after the promulgation of PNDC Law 223 (1989) which legalized private sector participation in the lottery, to give the needed impetus to district employment generation and revenue mobilization towards the development of Ghana.

Ladies and Gentlemen of the media, the Ghana Lotto Operators Association (GLOA), believe that the NPP Government is being deceived by the few disgruntled Senior Managers of the National Lottery Authority, who out of selfish interest are hell-bent on setting up new contract schemes to benefit from NLA long after they have left the office. This scheme is similar to what was inherited under the previous administration, by entering contract agreements with IT companies for new operating systems/platforms, to take their percentage.

Our reason is that all the schemes being orchestrated by the top hierarchy of NLA is intended to entrench a monopoly which has outlived its usefulness, by preventing private sector participation, to create an albatross whose ends are self-aggrandizement and corruption through the use of binding contracts.

This has been found to be a hoax designed to fleece them of their capital, seize their legally-acquired drawing machines for VAG Lotto, and bankrupt them permanently. The fees NLA unlawfully collected are: GH₵ 1million Cedis each paid by 24 operators to operate nationwide; GH₵180.00 Cedis each - for Lotto Writers nationwide; and GH₵ 5,000.00 each for Lotto Agents nationwide. We condemn the unlawful attempts to collect all private sector operators’ draw machines, equipment and operating systems, after deceiving them into demonstrating their self-acquired systems/platforms to NLA.

We further condemn these acts of administrative corruption by the Director-General, ask for his interdiction and the full refund of millions of Cedis collected from operators to license them to operate by drawing on NLA numbers, and for getting them to register according to regions for this non-existent lotto operation. We unreservedly condemn the huge public deception perpetrated against private lotto operators and ask for a government investigation into the activities of this Director-General.

Ladies and Gentlemen of the media, to date, all attempts by the private operators to obtain an MOU or official receipts for the millions of Cedis collected by NLA, has proved futile. We shall address these concerns at the appropriate forum, which is likely to bring a huge embarrassment to the government. This collection of funds by the top management of NLA intended to deceive GLOA members to commit their capital to render them bankrupt is fraudulent and needs to be investigated thoroughly by the Special Prosecutor’ office.

The NLA Director-General must know that threats issued in the presence of the top hierarchy of the Military and the Police at its meeting with GLOA, if carried out, will potentially decrease the fortunes of the NPP at the next elections, from its 3 million agents, writers, patrons and their families.

Ladies and gentlemen of the media, the National Lottery Authority, an unjustified monopoly created for lotto operations in Ghana, is seeking to bankrupt private sector lotto operators, by surreptitiously using illegal “bully-boy” tactics to frustrate, bankrupt and seize private operators’ machines and platforms, acquired under license for VAG Lotto operations in Ghana. It will be recalled that the Veterans Administration of Ghana (VAG) in 2014 officially licensed some private sector operators in GLOA to operate its VAG lotto initially for 4 years. This license compelled Operators to contract huge loans and make significant investments in software and hardware to start VAG Lotto operations. The investments made licensed Operators in VAG Lotto must be recovered.

Before the commencement of VAG lotto operations, the NLA waged legal battles against VAG, which ultimately settled the issue that Act 844 which gave authority of VAG to operate its own lotto, was not subservient to the NLA’s Act 722. This defeat in Court compelled NLA to begin to canvass the revocation of licenses granted to the private sector operators to run VAG Lotto, so it can be appointed to run VAG Lotto.

As can be seen today, NLA has forced VAG to revoke the licenses granted to private operators leading to heavy loss of significant investments made to operate the VAG Lotto. NLA has forced VAG into this bad decision with the intention to bankrupt Private Operators who are now saddled with huge debts to Banks.

Ladies and Gentlemen of the Media, our case is that the revocation of licenses before their expiration by VAG was unlawful and has brought untold hardship to private sector operators. The acquisition of the VAG lotto by NLA is unlawful, anti-competitive and frowns on the huge indebtedness private operators have been saddled with. As an ethical nation, such acts of daylight robbery should not be countenanced by any Government, especially the NPP Government that preaches private sector development.

We are therefore calling on the Government to immediately look into the matter and restore the private sector to its rightful place in the economy to play its role. What NLA has done cannot be seen as an act of good faith, and must be condemned by all law-abiding citizens of Ghana, for these unlawful actions kill economic growth and private sector job creation propagated by the NPP Government.

Ladies and Gentlemen of the media, GLOA calls the Government to act as follows:

1. Government should immediately investigate the Director-General for all monies collected by NLA from private sector operators (GLOA) and refund same to operators. These funds and systems/machines were unlawfully taken under fraudulent pretenses.

2. Government should interdict the Director-General and Sales Director of NLA until the issues are fully investigated and proper sanctions applied.

3. Government should establish an agenda for regularizing GLOA’s operation under the Section 2 (4) of the National Lotto Act (Act 722), 2007.

4. Government should propose modalities for the establishment of a Lotto Commission, to break up the monopoly of NLA, as monopoly in modern times is as good as bad governance, and an anathema to NPP’s much-touted support for private sector development.

5. Government should provide opportunities to licenses private operators nationwide, for the payment of appropriate lawful fees, monthly GRA Taxes, VAT and other charges to Government.

6. Government should allow GLOA to make significant financial contributions to the national budget, while providing nationwide employment to the teeming unemployed people in the districts.

7. Government should provide the needed support to regularize GLOA’s operations in their bid to facilitate increased revenue and employment generation at the district level.

Ladies and Gentlemen of the media, Ghana Lotto Operators Association (GLOA), including its agents and writers, constitute a very significant partner to the Government, and estimates that it can support provision of employment to about 2 million Ghanaians, far above the 400,000 estimated in the National Security Survey (1998).

The NPP government’s inability to create long-term jobs for majority of Ghanaians in our districts can be reversed through private sector participation in lotto under Act 722 and Act 844. We know that the NPP was punished in 2008 and 2012 elections for banning private participation in lotto. GLOA’s mobilization of lotto writers, agents and patrons across the country during the 2016 campaign paid off significantly in NPP’s return to power.

It is hoped that government will make the necessary changes at NLA, as GLOA provides support to NPP’s development agenda to provide jobs and restore hope in areas where central government will not be able to create viable, long-term and sustainable employment in significant amounts.

GLOA is committed to finding a lasting solution to the problems created by the promulgation of Act 722. The Government needs to understand that, the unaddressed concerns of citizens can lead to uncontrolled anger, and bring change at elections.

Dan Borsor
(Chairman)
For And On Behalf of Ghana Lotto Operators Association (GLOA).

No Gov’t In 4th Republic Has Matched Our 3years Achievements...
41 minutes ago