Eye on France: What is the G7 good for? 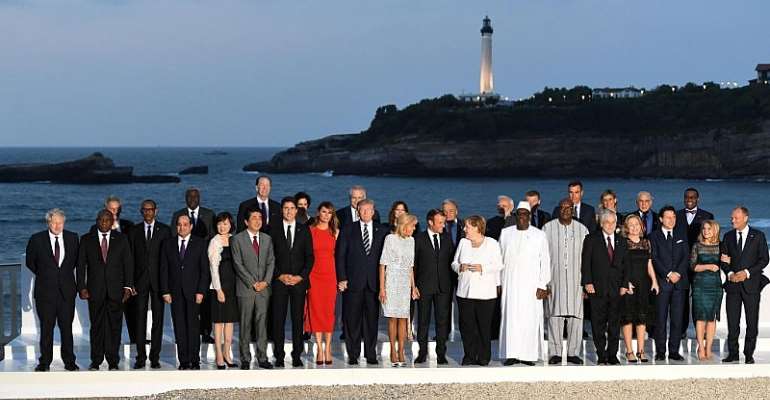 Today's French papers are unanimous in their efforts to analyse the outcome of a weekend of blather at the G7 summit in Biarritz. The general verdict is positive. With different shades of doubt and divergence.

What really happened at the Biarritz G7 summit, and should we care?

“A winning bet” is the headline to the editorial in right-wing Le Figaro.

“Success of the G2” is left-leaning Libération's ironic view of a meeting which, Libé feels, was completely dominated by French President Emmanuel Macron and his US counterpart Donald Trump.

With Boris Johnson trailing Brexit like a convict's iron ball, German Chancellor Angela Merkel understandably worried about domestic affairs, Italy's Giuseppe Conti wondering if he still has a government, it wasn't difficult for the odd couple to take centre stage.

But even Libé is forced to admit that what the paper earlier dubbed the “Macron Show” was, ultimately, a success.

Full of sound and fury, signifying nothing
The G7 is a strange creature. The idea goes back to French former president Valéry Giscard d'Estaing and the days of the first global oil crisis in the Seventies. Giscard thought it would be a good idea if the leading industrial nations had a forum for concerted action, so that they could put manners on the pesky suppliers of raw materials.

That didn't work. But the annual talking-shop has kept going, surviving even the expulsion of Russia and the illogical absence of China.

It's now a pure public relations exercise, tailor-made for noisy personalities like Twittering Trump and Blustering Boris. And it's obviously difficult to discuss global co-operation when four of the seven participants are determined nationalists or outright isolationists.

Libération calls the annual meeting an “international circus,” important in the sense that it proves world leaders can still talk to one another, even if what they say is without real impact. Or even, real content.

Underlining the obvious
Now we know that a peaceful resolution of the Iranian nuclear crisis is essential, and perhaps possible. That China and the US have to stop trading tariffs. That Google and the other internet monsters are to pay tax like the rest of us. That burning rain forest in the Amazon basin is bad news for the planet.

We knew all that already, of course. But it's now going to be marginally harder for the participating leaders to ignore their obligations. And it has certainly put Emmanuel Macron back in the spotlight as a global leader.

All politics is local politics
Which brings us to the million-euro question.
Will a blinding success on the international stage make it any easier for the French president to sell the various reforms which he hopes to see through in the parliamentary year just opening?

Nothing is less sure. Especially since the up-coming topics include pension reform, changes to social welfare, education, taxation...just the sort of stuff to have people reaching for their yellow vests and heading out the door.

That's precisely the angle taken by business daily Les Echos, where we are reminded that global glory is a fine thing but that politics remains a local business.

Perhaps conscious of that very fact, Emmanuel Macron has told his ministers that he wants to see more humanity in their approach, and less bureaucracy. Whether that will change the fundamental facts of having to work longer for a smaller pension, or facing an increased tax bill remains to be seen.

Not wishing to be overly pessimistic, but, by Christmas, Emmanuel Macron may look back on the public taming of Donald Trump at the G7 as one of his easier triumphs.