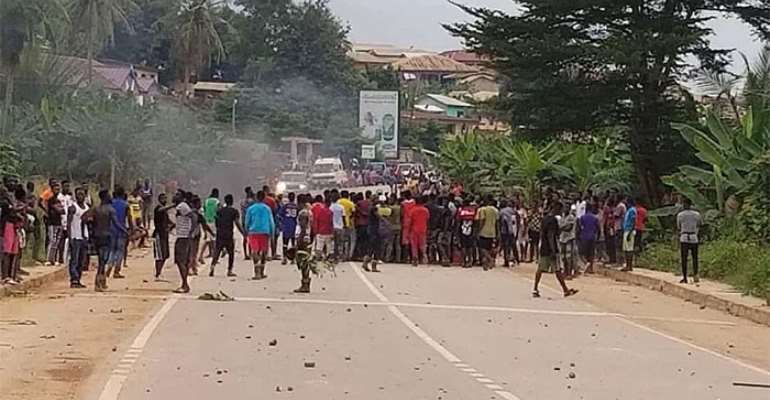 The youth blocked the main road leading to and from Ayamfuri

Two persons were killed when residents of Ayamfuri in the Central Region clashed with members of Operation Vanguard, the anti-illegal mining task force, last Friday.

According to sources, the incident happened as a result of the alleged refusal by Perseus Mining Company in the area to cede part of its concession for small-scale miners in the area.

DAILY GUIDE checks showed that some residents, mainly illegal miners, 'invaded' the mining company’s concession with tailings which were being protected from being taken away because it contained cyanide, a deadly chemical used in mining gold.

The personnel from the anti-illegal mining taskforce were then called in to help drive the alleged illegal miners away and in the process, a serious confrontation ensued.

Other sources also indicated that in the ensuing confrontation, some of the youth set ablaze a pickup vehicle belonging to Operation Vanguard, which angered the military personnel who stormed the community and started shooting sporadically.

Initial reports were that eight persons – including five residents and three military personnel – were killed in the incident but a source at the mining company confirmed that two persons lost their lives during the melee.

The deceased persons, the paper gathered, were all residents of Ayamfuri and included a kingpin of the alleged illegal miners in the area.

According to sources, the galamsey kingpin died on the spot while the other deceased person was pronounced dead on arrival at the Dunkwaw Government Hospital in the region.

The paper also leant that one of the personnel of the anti-galamsey taskforce sustained gunshot wounds and was treated at a clinic and discharged.

Deborah Mensah, a resident, insisted that four persons died and that the incident happened when some youth in the area who were transporting some sand in a tricycle were attacked by the military personnel.

Meanwhile, when contacted, a source at Operation Vanguard indicated that no death was recorded during the incident and that if anyone was reported dead, it was not as a result of the clash.

Public Relations Officer of the Lands Ministry, Abraham Otabil, indicated that the minister's visit was, among other things, to find out at firsthand the cause of the violence that reportedly led to the death of two persons.