Impact of Judicial Corruption on the Socio-Economic Development of Ghana 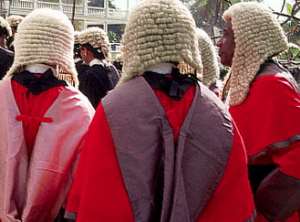 Judicial corruption to the best of my knowledge and understanding is where the third arm of government, thus the judiciary, have its members fondly involved in masterminding or orchestrating acts that are in contravention of acceptable laws and norms with the motive of gaining benefits for themselves, their cronies, family members and/or political parties they are secretly affiliated with. Some judges may cunningly sell favourable judgment to the highest bidder who otherwise should have been the guilty party in the case brought before them, taking into account the facts and credible evidence submitted to the court. They may secretly accept bribes from a litigant, be they the plaintiff or the defendant, through a third party, to declare verdict in their favour. They may choose to drag the case unnecessarily long, into years, until one party, normally the would be victorious but otherwise poor party, throws in the towel. This indirectly enables the judge to decide the case in favour of the otherwise guilty party that has greased his/her palm with Cedi or dollar wads.

Some court clerks, bailiffs and registrars are known to remove, or make to disappear, from trial dockets or court files vital evidential documents. They take bribes to hide or remove such documents from the files of some litigants to facilitate the chances of their paymaster (whoever has bribed them) to winning the case.

In all the above circumstances, the law is obstructed from taking its normal course. The delivery of justice is not allowed to be based on the provision of facts and abundance of credible evidence, but on whom you know and how much bribe you can pay a judge and his or her agents and assigns.

Everybody is a potential criminal but it takes the enforcement of the law through the police and all designated law enforcement agents and finally the courts, to curtail or stop the criminal urge within a person from materialising to wreak havoc on society. However, if the court system meant to enforce the stringent observance of the laws to make the nation safe for the citizens and their properties is weakened through the acceptance of bribe and extortion by judges, court registrars, court clerks and bailiffs, will lawlessness and all forms of criminalities not reign supreme?

In a country where crimes of all shapes are in open perpetration and perpetuation, facilitated by the corrupt attitudes of the judges, lawyers, court registrars etc., such a country does not see any level of commendable socio-economic development. In Ghana, armed robberies, kidnappings, murders, official corruption effectuated by government and civil service functionaries, are on the ascendency. These evils exacerbating the already precarious socio-economic state of affairs in the nation can in a higher degree, or to some extent, be blamed on the perceived rotten judicial system in the country.

When a hardened criminal is arrested and arraigned before a judge, the next day or two, the criminal is seen walking down the streets of Ghana completely a free person. The police then come to the conclusion, why should we bother ourselves arresting criminals only to have them freed by the court? The police then decide to take bribes from criminals to not arrest them in the first place. The criminals by their understanding of not being arrested, or to be set free by the courts when arrested, will consequently be emboldened to commit their nefarious activities with impunity.

Which investor with common sense, will like to invest their money in a country where all sorts of crimes are rife without effective measures in place to curb them? Which foreign investor will come to invest their hard-earned money in a country where when they happen to need the services of the judicial system, heavy bribes will have to exchange hands or else, the case may drag on in the court for years on end or may not receive fair judgment in the end?

Again, by the love of corruption by our judges, court registrars etc., will the police or our law enforcement agents not be tempted to have appetite for the committal of crimes themselves, leading to the breakdown of law and order in the country to the detriment of all and sundry? Were the judges to be fair, firm and friendly, deciding cases on the merit of the facts and evidence submitted to them, without allowing their decisions to be induced by offer of bribes, peace, tranquillity and prosperity will reign to the admiration and benefit of every citizen.

How come that an official defrauding the nation of sums of money running into millions of Ghana New Cedis is allowed to saunter through the streets of Ghana a free person but someone gone to steal cassava or plantain from someone's farm or gone to steal a hen from his/her neighbour is sentenced to five to ten years in jail? Does it make any sense? Is it not a travesty of justice?

Judicial corruption in Ghana is at times the cause of the rise in instance or mob justice. The people take the laws into their hands to inflict punishment on apprehended culprits knowing that the police and the courts will set such culprits free when taken to them or taken before them. Is such an attitude by the citizens good for the socio-economic development of Ghana? Will innocent persons falsely accused of crimes not be punished by the mob which otherwise will not be the case were our judges to be honest and professionals enough in deciding cases brought before them?

Many well-to-do Ghanaian nationals residing abroad who feel to come over to Ghana to stay and invest their money in various sectors of the economy are scared to do so. They are scared of being raided and killed by thieves, or being denied justice by the courts, should they happen to need the services of the courts. If somebody like say, one of our traditional chiefs who are notoriously noted for selling the same piece of land to several persons at a time, or any of our so-called powerful persons but who are indeed criminals, does cheat them and they take them to court, the judges will needlessly delay the case or in the end decide it in favour of the criminal. With their knowledge of this, people are not coming home to invest their hard-earned money in the economy.

Without investments to create jobs, most of the youth or the citizens will not have any proper paid jobs to do hence falling for any criminal job thrown at their way or that comes into mind. There is no wonder the spate of criminal activities going on in the country. Where joblessness abounds, crime is always rife. Where crime is rife, the security of the people and the protection of their jobs and properties are at high risk.

With the increase in crimes, foreigners may be scared to visit the country. This will impact on the nation's tourism thereby reducing the amount of money our hotels and tourist attraction centres can generate for themselves and for the nation. All these problems come about as a result of the corrupt attitudes by our judges and the judicial system staff.

Look at the ongoing Kumawu chieftaincy case if I should cite it to buttress my contention. In the face of abundant credible evidence, made of facts, documents and videos, the case has been dragging on in the courts since year 2007. Video evidences which are credible, permissible and acceptable by Ghana courts have allegedly been tendered in yet, some judges do not consider them or they overlook them. By delaying the case for the reasons only known to them but obviously bordering on corruption, are they not indirectly pushing some people to take the laws into their hands to do whatever they deem is appropriate?

Ghana judges and the public, watch the following two evidential videos to judge for yourselves if what is going on in Ghana within our judicial system is anything to be proud of? They were not long ago exposed by Anas Aremeyaw Anas, the supposedly Ghana ace investigative journalist yet, some judges are still shamelessly doing what they know best.

Is there any wonder that the late murdered High Court Justice Agyepong, in a convivial conversation with his late nephew Kwame Nyame, made a remark in response to Kwame's question to him that, "some judges may have higher qualifications but they cannot deliver fair judgment" when they rule on cases. What do you think could have prompted the honourable judge to utter that statement? What influences the judges to be unable to make fair judgments? Could the infatuation with corruption not play a part?

From the little said, judicial corruption is impacting badly on the development of Ghana. It has strengthened the resolve by our politicians and well-placed civil service personnel to embezzle funds and state assets with impunity. The judges by their deplorable fondness for corruption have rendered the laws of the land a toothless bull before the hardened criminals and our exceedingly corrupt politicians who are a stain on the reputation of the country.

This bad attitude must stop if Ghana is serious to develop as a nation with Ghanaians hoping to prosper. For, the key to developing Ghana is not only in the hands of the president but also, in the hands of the judges. A judge can even order the imprisonment of a President of the nation should the president outrageously fall foul of the law. I well understand the constitutional immunity granted to a president in the execution of his/her duties but not when found to be grossly embezzling funds or committing criminal acts for his/her selfish ends. This is how powerful a judge is or can be.

Ghanaian judges have a duty-bound vital role to play in the socio-economic development of Ghana. They have the obligation to let the nation succeed if and only if, they will stop their shameless infatuation with corruption. There are case instances to prove where judges, court registrars etc. have accepted bribes to twist justice in favour of would-be guilty parties in civil or criminal lawsuits. If I don't have any proof at all, I can cite Anas' exposé into the Ghana judicial corruption. I can also fall on the audio recorded utterances by one Madam Berhene from the Kumawu Ananangya royal family, as indicated above, to prove how rife judicial corruption is in Ghana to deny some people the delivery of true justice.

The ball is now in the court of our judges. They can make or break the socio-economic development of Ghana by how they deliver justice! They should note that the world is watching them, especially on cases that have been well publicised on social media and subsequently gone viral.

You Won't Be Shielded For Misconduct – IGP Cautions Police O...
42 minutes ago