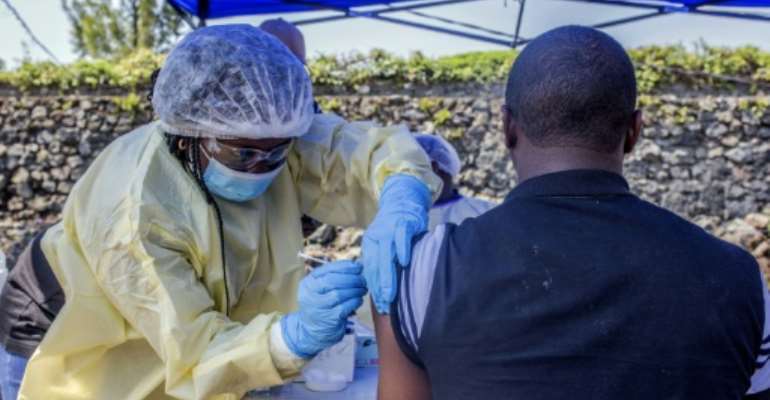 A man receives an Ebola vaccine in Goma, Democratic Republic of Congo, on July 15. By Pamela TULIZO (AFP/File)

The World Health Organization (WHO) said Wednesday that Burundi had begun vaccinating frontline workers against Ebola at its border with the Democratic Republic of Congo, where an outbreak of the virus has killed close to 1,900 people.

The campaign to vaccinate at-risk staff against the deadly hemorrhagic fever started Tuesday at Gatumba, the main crossing point from Burundi to its much-larger neighbour, WHO said.

Burundi has received doses of the rVSV-ZEBOV vaccine, an unlicensed product that has been shown to be effective against the Zairian strain of the virus raging in DR Congo.

It would be administered to those at greatest risk such as health workers along the border, laboratory staff and burial teams, WHO said.

"The vaccination of health and frontline staff is a significant step forward in preparing for the response to this disease," said Dr Kazadi Mulombo, WHO representative in Burundi.

The vaccine, developed by US pharmaceutical group Merck, proved "highly effective" in a trial conducted in Guinea in 2015 during the Ebola epidemic in West Africa, he added.

The vaccination campaign will be overseen by WHO and Burundi's health ministry.

The Ebola outbreak in eastern DR Congo is the second-worst in history. A total of 1,892 deaths have been recorded since the outbreak began on August 1 2018.

No cases of Ebola have been recorded so far in Burundi, a tiny nation of 11 million.

But its border with DR Congo is 236 kilometres (147 miles) long and considered highly porous, and the whole region is on high alert.

In June, three people from one family died in Uganda from Ebola after returning from DR Congo via an unofficial crossing point.

Burundi also shares a border with Rwanda and Tanzania.

The Congo outbreak is the first where vaccines have been rolled out on a large-scale.

The rVSV-ZEBOV vaccine has already been administered to some 170,000 people, especially frontline workers, in DR Congo.

This week, US researchers announced that two prototype drugs being tested among Ebola patients in eastern DR Congo boost chances of surviving the disease.