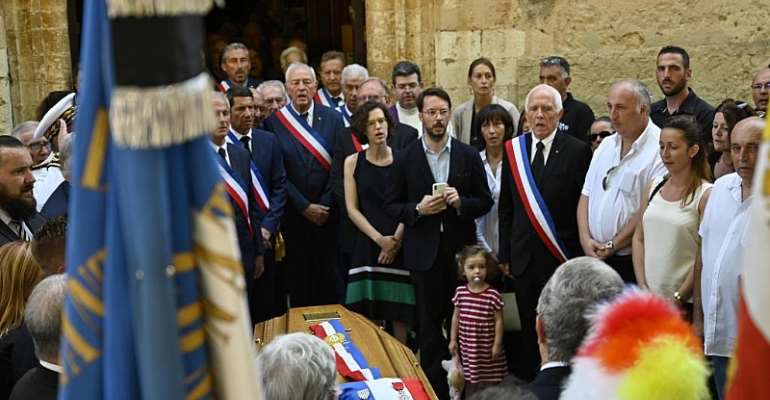 French President Emmanuel Macron has vowed to clampdown on anti-social behaviour following the death of longtime mayor Jean-Mathieu Michel, who was killed trying to prevent fly-tipping.

In a message read out at Jean-Mathieu Michel's funeral Friday, Macron vowed to "personally see to it" that anti-social behaviour is met with a "ruthless" response.

Hundreds of people gathered in the small valley town of Signes in the Var region east of Marseille to pay their respects to the longtime mayor.

Gourault laid a posthumous Legion of Honour on the coffin during the ceremony.

Michel was killed on Monday after allegedly being run over by two men in a van that he found dumping construction waste by the roadside.

The mayor had ordered the men to pick up their rubble. The men complied, however, when he asked them to wait for the police, they attempted a getaway, reversing into Signes's mayor of 36 years and killing him.

Residents in mourning
The van driver, who claims it was an accident, has been placed under formal investigation.

"He died carying out his job, because like tens of thousands of mayors, he chose the Republic, the common good and community life," Macron said in his letter, read out by Gourault, in which he promised to prevent the demise of "the nation state."

Investigators are treating Michel's death as an accident but it has plunged the town of Signes in mourning.

Deputy mayor Alain Reichardt told mourners that Michel had died "trying to uphold the law, defend his territory and ensure respect for the environment."

The problem of illegal dumping, or fly-tipping, is widespread across France, according to officials and environmental campaign groups – even though no official figures exist.