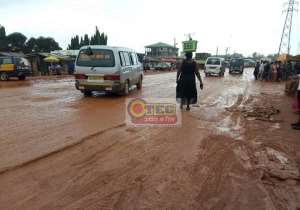 Some communities in the Bosomtwe District of the Ashanti region have threatened to stage a demonstration over the bad nature of their roads which have been ignored by the district authorities.

The communities, Esreso, Sewua, Prabon, Aputuogya and Dompoase, according to their residents, have had their communities cut off from neighboring communities due to the uncompleted road construction.

They said prior to awarding the contract to Kofi Job Construction LMT, though the roads were bad, the contractor after the first phase has abandoned the project and left without trace, making the road nature comparably worse.

‘Operation Fix Our Roads’ (#OFOR) is a project initiated by Otec FM in collaboration with Media Foundation for West Africa (MFWA), to fix bad roads in the Ashanti region.

Assembly members for Esreso East/ Sewua Prabon and Aputuogya Electoral Areas, Hon. Michael Yaw Nkwanta and Hon. Joseph Asante, who are leading the demonstration, said the state of the roads are having a toll on their economic activities.

“We are going to mount pressure on the authorities to demand answers on when the contractor will resume works to complete the project which is affecting our daily lives,” Hon. Nkwanta said.

“If we don't see the contractor back to work by next week, we will hold a huge demonstration and a surprise action will follow,” Hon. Asante also warned.

According to them, the road from Dompoase Junction to Esreso town has become a death trap following the near-collapse of a bridge that links the two communities, a situation they lamented the authorities have turned deaf ears to their complaint.