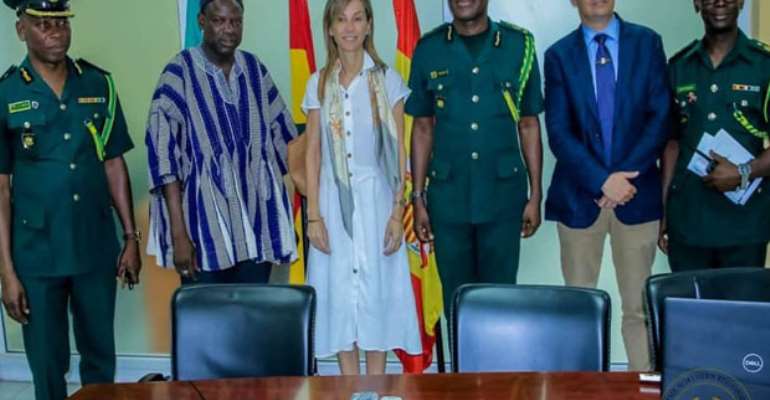 The Spanish Ambassador to Ghana, Comptroller-General of Immigration with Salifu Saeed in Tamale

The Spanish Ambassador to Ghana, Alicia Rico Pérez del Pulgar and the Comptroller-General of Immigration, Kwame Asuah-Takyi, have commissioned a Migration Information Center (MIC) funded by the Spanish Embassy in Tamale in the Northern region.

The Migration Information Center (MIC) is intended to provide accurate traveling information and education to the general public and prospective migrants on safe migration.

The Spanish envoy expressed optimism that the project would deepen the cooperation between the Kingdom of Spain and Ghana for the purpose of supporting the Migration Information Bureau (MIB) of the Ghana Immigration Service(GIS) to fight against irregular immigration and consequently against organized crimes.

According to her, the complexities and numerous linkages of migration issues and management activities involves more than a single entity and pledged the Kingdom of Spain to the Republic of Ghana, especially the Ghana Immigration Service, to fight the menace of irregular migration.

‘it’s in this direction that it has granted an aid of €87,000 to contribute to the co-financing for the expenses of the establishment and activities of the MIC, it is expected of the Ghana Immigration Service to work tirelessly to achieving the purpose’. She said

The Comptroller-General of Immigration, Kwame Asuah-Takyi said Immigration Officers and Men in Tamale have already begun outreach and sensitization programmes in the area , educating the people on the dangers involved in travelling without receiving adequate knowledge on their safety.

He advised the youth not to be persuaded and be pushed into modern day slavery migration which could cause them to overwork in a strange land, searching for non-existing jobs and riches.

‘The youth can motivate themselves and stay in Ghana to develop their country and provide their quotas rather than ignorantly falling into the hands of some unscrupulous individuals who are only interested in exploiting them’.

The Spanish envoy and the Comptroller-General also paid a courtesy call on the Dakpema at his palace accompanied by some officers from the Service.