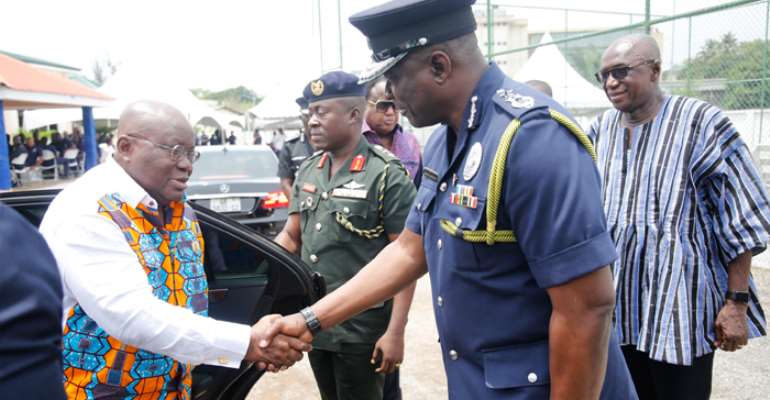 “If you reveal your secrets to the wind, you should not blame the wind for revealing them to the trees.” Kahlil Gibran

DAVID ASANTE – APEATU is, or was, by all standards (someone would say: to all intents and purposes), a fine policeman. On 1st January, 2017, the President, Nana Addo appointed him IGP granting him a two-year contract and he took over from Dr. John Kudalor. On 22nd July, 2019 – with some three weeks to his official retirement- the President asked him “to proceed on leave”, Oppong-Boanuh was to take over from him.

The former IGP summed up his belief in Ghana and his profession thus: “…I am proud to be a Ghanaian (and) a serving member of the Ghana Police Service, and it is this pride and strong sense of purpose that allows me to carry myself with dignity to be able to strive for excellence in all that I have done in Ghana and internationally”.

After obtaining the MSc in Chemistry at Kharkov State University (Ukraine) in 1985, Asante – Apeatu returned to Ghana and enrolled at the Ghana Police College in Accra in 1988. He was posted to Tumu as a District Officer. He became a government analyst (at the Forensic Laboratory). He took up international appointments in France, Bosnia – Herzegovina, Liberia and the Gambia. He also investigated the serial killing of over 30 women in 1988 in Accra; the $38 million cocaine haul; the murder of Roko Frimpong, the Vice President of Ghana Commercial Bank and the murder of Ya-Naa Yakubu Andani.

The President in granting Mr Apeatu a contract for 2 years was acting per Article 199 Clause 4 of the 1992 Constitution as amended by Section 6 of the Amendment (Act 527, 1996). However, his sack has evoked a lot of sentiments. Paul Avuyi, a retired police chief noted: “… the curiosity in the whole thing is that he (Asante – Apeatu) had only four weeks' extension of service to end and then he was asked to proceed on leave.” Adam Bonaa of Security Warehouse thought: “If you have an IGP whom you have asked to serve, you call him one morning and tell him that, with immediate effect he should leave the office. So he drives GP 1 in the morning and in the afternoon by one o'clock he is no more. No dispatch rider… Granted that the President has the prerogative to appoint and then to release, the office of the IGP should be entitled to some considerable amount of respect…” And Asiedu Nketia who had commented negatively about the appointment of Asante – Apeatu as IGP to “cover up NPP's shady deals” (the missing cocaine saga, the murder of Ya-Naa Yakubu Andani) now decries the sacking of Asante– Apeatu as a political maneuver. Major Boakye Djan, spokesman for the AFRC thought the IGP “should have been removed a long time ago…his age was not going to permit him to do the work.”

Superintendent Peter Lanchene Tuubo was the Executive Secretary of David Appeatu. He was expected to follow the IGP wherever he went, and it should not surprise anyone to hear that Tuubo was privy to many top national secrets. For the IGP, was by virtue of Article 83 (1) (c) of the Constitution of the Republic of Ghana, a member of the National Security Council.

In July this year, Tuubo resigned his position as Executive Secretary to the IGP and also from the Police Service to take up the role of Member of Parliament candidate of the NDC in Wa West Constituency. The MP for Manhyia North, Collins Amankwaa, lamented the action of this ex-police officer: “…if a police constable or lance corporal quits active service for politics, the effect is very minimal compared to somebody who has gone through the ranks… to be Executive Secretary. It means any decision taken by the IGP in relation to the security of the state and the police service he was part of it. This makes it quite scary.” To the MP, the action of the MP-to-be is an “embarrassment” to the Ghana Police Service. And Abronye DC would not spare the police officer.

During the 'Aluta' days of the 1970s and early 1980s (the days of Worsemao Blay, Kabral Blay Amihere, Oduro Kwarteng-ODK) the students of Ghana would go 'wild' and confront the government of the day. General Kutu Acheampong was a victim; he and UNIGOV; so was Major General Akuffo. Students were always glued to the radio, particularly at 1:00pm and 6:00pm expecting to be ordered to go home. You would hear “Y'awu oo!” (“We are dead”) whenever the order was announced. The students were on the anti-unigov side and to them “Aluta continua, vitoria e certa” (The struggle continues, victory is certain), never “Aluta Abolishoir.”

It was an ordeal packing one's books, bedding and other personal luggage and getting a taxi to convey the students out of the campuses to town. So, the expression “Y'awu oo!” became a by-word among the students. The government of the day would feel the pinch, and Kutu Acheampong would want to please the international community. The students would say they need “guarantee” for their safety when they returned to campus. It is alleged that Kutu would wince and respond: “How can I know the measurement of every student and get them “guarantees” (shoes).

Any government worth its salt would take security matters seriously. Hecate, one of the witches in 'Macbeth' would say: “He shall spurn fate, scorn death, and bear his hopes above wisdom, grace and fear. And you all know security is mortals' chiefest enemy.” This was to imply that Macbeth's belief that he was untouchable would ultimately result in his downfall. It is not for us mortals to know what the future will be like; but when the tall-tale signals are given, one is expected to take a cue.

Oppong– Boanuh who takes up the Acting IGP position was born in 1958 at Aboabo No1. He had his 'O' and 'A' Levels at Dormaa Secondary Scool. After graduating in law, he became a member of the Ghana Bar Association in 1984. Between 1986 and 1988, he was a legal officer of the Agric Development bank. In 1998-1996 he was the Chief Staff Officer to the IGP. He held positions of Director-General Human Resources, Regional Commander Director – General (legal Prosecution), then Deputy IGP. He has done international assignments in Mozambique, East Timor and Sudan.

The only advice one would give shall be this Twi proverb: “Dua a Ananse atena ase awuo no, Ntikuma ntena ase nto nko”. (The tree under which Ananse sat and died, Ntikuma should not sit under and doze). QED=Quod Erat Demonstrandum.

The author has 158 publications published on Modern Ghana.