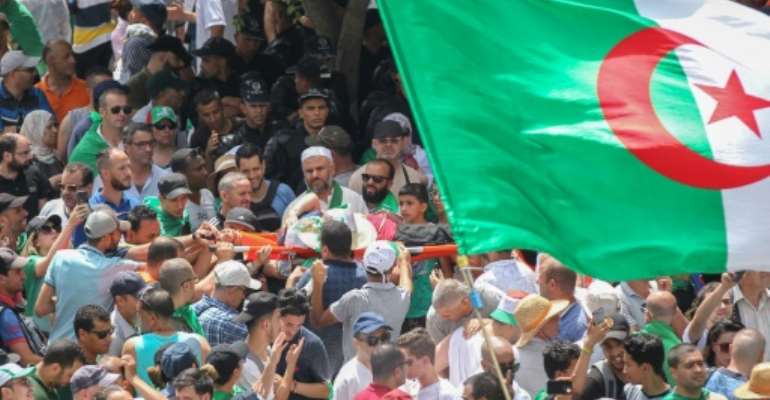 Algerians carry a protester on a stretcher at a weekly demonstration on July 5, 2019. Algerian police have opened an investigation after a video circulated online appeared to show protesters being beaten by security forces. By - (AFP)

Algerian police said Sunday they had opened an investigation after a video circulated online appeared to show protesters being beaten by security forces.

Thousands of people took to the streets of the capital Algiers on Friday, the latest in weeks of rallies against the ruling class amid an ongoing political crisis in the country.

In a video widely circulated on social media, two men are seen on the ground being beaten by police officers with batons.

Police chief Abdelkader Kara Bouhadba ordered a probe into the footage "showing clashes with police forces probably during the protest on Friday," the Directorate General for National Security (DGSN) said in a statement.

The DGSN stressed "the need to investigate... to determine liability and take the measures required by law," in a message on its Facebook page.

Scuffles broke out at the end of the Algiers rally when police officers grabbed the Berber flag -- banned from protests -- from demonstrators' hands and removed it from streetlights.

There was a major police presence at Friday's rally as demonstrators continued their push for a political overhaul following ailing leader Abdelaziz Bouteflika quitting in April in the face of mass demonstrations.

Interim president Abdelkader Bensalah has called for a national dialogue to pave the way for elections, but demonstrators want top figures from Bouteflika's era to step aside before polls are held.