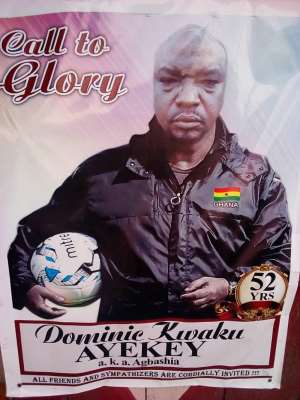 The Volta Regional Football Association Juvenile Committee chairman, Dominic Koku Ayeke who died on the 9th of May this year after a short illness has been laid to rest.

Until his death, he was a member of the Regional Executive Committee, Emergency Committee and the Chairman of Ketu South District Football Association.

The astute football administrator was the owner and bankroller of Dominic Fc (formerly Anlo Kotsieko) a juvenile club in Aflao.

Mr. Ayeke, a Lotto Agent left behind a wife and 5 children.

Agbashia, as he is popularly known was laid to rest at his hometown Anloga, behind the Zion College School.

Present at the funeral were members of the football fraternity in the region(District Chairmen, all Division Two Clubs, Juvenile Clubs, Referees, and Match Commissioners).