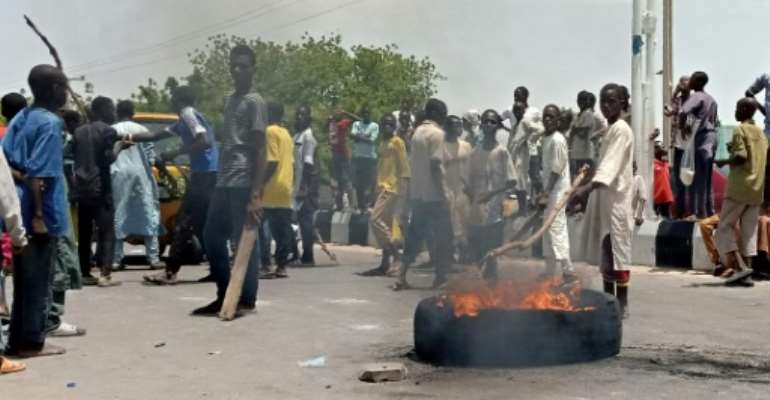 Protesters block a main road in the northern Nigerian city of Maiduguri, demanding the authorities ban a local anti-Boko Haram militia they say is abusing them. By Audu MARTE (AFP)

More than 2,000 people protested Sunday in the northern Nigerian city of Maiduguri, calling for a ban on the anti-Boko Haram CJTF militia they accuse of abuses after the killing of a rickshaw driver.

The protesters blocked major roads in the Suleimanti area of the city and set fires, causing chaos despite pleas from police and military officers, an AFP reporter at the scene saw.

"We want the CJTF to be banned from the city because of the abuses we suffer in their hands," said Suleimanti resident Bukar Saleh.

"They have become a law unto themselves and are treating us badly. And now they have started killing us," Saleh said.

The CJTF militia tried to stop the demonstration, attacking protesters with batons and arresting scores of them.

The protest erupted hours after a rickshaw driver was shot dead near a militia checkpoint.

"The victim was a known resident and his name was Modu but the CJTF just shot him for no reason," Saleh said.

The CJTF insisted however that the victim was shot for failing to stop at a checkpoint during nighttime curfew hours.

The militia have intensified night patrols in the area in recent days following incursions by the jihadists, he said.

"The driver's refusal to stop raised the suspicion of our men and one of them took him down, because they believed he was a Boko Haram terrorist on a mission," Babakura Abba-Ali, the CJTF head in Suleimanti area, said.

The militia man was handed over to the police for investigation, Abba-Ali added.

The CJTF emerged in 2013 as a vigilante group in response to Boko Haram's deadly attacks in Maiduguri.

The vigilantes were later organised into a militia force and embedded with the military to fight the jihadist group.

The decade-long Boko Haram conflict has killed at least 27,000 people and forced some two million to flee their homes in Nigeria alone.

The violence has spilled into neighbouring Niger, Chad and Cameroon, prompting a regional military response to fight the jihadist group.