Why Akufo Addo Now Operates A Dictatorship Form Of Government 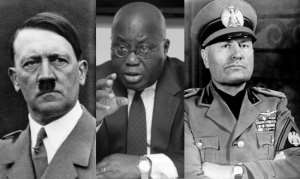 I have already provided pieces of evidence of how some foreign media, including an Italian journalist, holding high the new Ghanaian government and acknowledging the efforts of Nana Akufo Addo in revamping the economy of Ghana.

But the assassination of journalist Ahmed Hussein-Suale, the closing down of some Ghanaian media offices and the arrest of some journalists in the country are really a bad omen for the NPP government, so far as the foreign media is concerned.

There is a problem in Ghana, which I don’t blame anyone, why would one waste his time to think of external issues affecting his country, while they are many problems at home to deal with?

Nana Addo, I will not repeat this again, I really respect you but you are ruining your own reputation which may cost your chances of winning the 2020 elections because the foreign media will publish everything going on in Ghana like always and the whole world will know that you are a “dictator in democratic clothing.”

It seems you haven't learned anything significant from this Cathedral issue amidst unemployment and collapsed banking institutions. Don't forget that the mouth which said Hosannah! Hosannah, here comes Christ the Saviour, was the same mouth which cried out Crucify him! Crucify Him!

Just as I translated the Italian news about your efforts in building Ghana’s infrastructure, which has captured the foreign media’s attention, please, just give me just three months; I will publish a foreign story about you being branded a dictator by the same foreign media because of the afore-mentioned reasons.

The dictionary defines the word ‘dictator,’ as a ruler with total power over a country, typically one who has obtained control by force.” You didn't take Ghana by force, you defeated the NDC in 2016, but I believe many Ghanaians will agree with me that you have now a dictatorship instincts because you want to win the 2020 elections without a challenge or question.

However, Nana Akufo Addo, I don’t think these Hitler and Mussolini instincts or ideologies are necessary, leaning on this kind of government will rather cause your downfall than giving you victory, because Ghanaians like freedom, they hate government’s domination. Once they know that you have that instinct, many will be afraid that you’ll extend your long arms on them.

Like many ignorant Germans who thought Adolf Hitler was truly great leader doing something special for them, Italians have now awakened from their slumber to realize the fact that Mussolini was more disastrous than the worst governments of today.

Mussolini inspired by Hitler declared war on the whole world, until he became a promoter of the racial laws, apart from the positive things to build infrastructures in the country, his inevitable consequences of the nature of the fascist regime caused his downfall.

Like Mussolini, the last days the life of Adolf Hitler, the Nazi dictator, was taking refuge in the bunker, investigations have now proved he fled to Argentina. Why all these references?

The path Nana Akufo Addo has chosen in Ghana, hoping that will let him hold on firmly to his leadership in Ghanaian politics will actually cause his downfall if care is not taken.

Even if he is not responsible for the closure of the media offices or the arrest of the Ghanaian journalists, as the president under democracy form of government, he has to denounce it because such events do not take place in a truly democratic government.