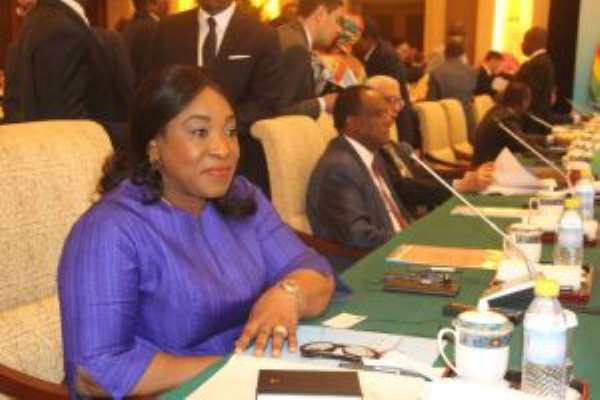 She said it is in view of this that the President, Nana Addo Dankwa Akufo-Addo, has strongly advocated and robustly defended Sino-African relations at many international fora, including the United Nations General Assembly.

The Minister was confident that the Sino-African relations in this new era would be characterized by the forging of an even stronger community with a shared future based on the principles of sincerity, mutual trust and respect for mutual prosperity.

Hon. Shirley Ayorkor Botchwey has therefore called on China not to be distracted from its objective of assisting Africa to develop, but rather take advantage of the opportunities through its support for the development of critical infrastructure and manufacturing industries across Africa.

According to her, Ghana expected China, beyond national development agenda, to give consideration to regional flagship projects that would enhance the integration process to boost wealth creation for the benefit of both sides.

The Ghanaian Foreign Minister was addressing the Coordinators' Meeting on the implementation of the follow-up actions of the Forum on China-Africa Cooperation (FOCAC), in Beijing, China last Tuesday, and said the meeting provided a unique platform to promote sustained dialogue between China and Africa.

The outcomes of these meetings were a reflection of China's President Xi Jinping's sterling leadership over the last six years and a fitting testament of his enduring vision of creating a community of shared opportunities for all countries, strong and weak, developed and developing, which has been globally acclaimed, the Minister stated.

She expressed pointed out that the coordinates within Africa were beginning to align, and said “The African Continental Free Trade Area Agreement, perhaps the most important continental instrument since the formation of the Organisation of African Unity (OAU) in May 1963, was soon to be made operational.

The Minister announced that discussions were far advanced towards the establishment of the Single Africa Air Transport market to improve connectivity across the Continent.

“We in Ghana are of the firm belief that Africa stands a better chance of achieving its developmental goals, particularly if it works together and forges enduring and mutually beneficial partnership between and among its peoples and with the People's Republic of China, particularly within the framework of FOCAC,” she stated.

She pointed out that the establishment of the China-Africa Institute, the organisation of the first China-Africa Expo, the disbursement of the $60 billion facility for Africa among others, all pointed to the fact that the implementation of the outcomes of the Beijing Summit was on course.

She, therefore, urged both sides to work assiduously to ensure the successful implementation of all the outcomes of the 2018 FOCAC Summit.

The Minister commended the two Co-chairs of FOCAC for the efforts deployed to make the meeting possible and also for the impressive and extraordinary warmth extended to delegates by the Chinese side since arrival in Beijing.

Hon. Shirley Ayorkor Botchwey added her voice to that of her colleagues in extending warm congratulations to the government and people of the People's Republic of China on the successful holding of the second Session of the 13th National People’s Congress (NPC) and the 13th National Committee of the Chinese People’s Political Consultative Conference (CPPCC) which were held at the Great Hall of the People in Beijing during March 2019, as well as the successful hosting of the Second Belt and Road Forum for International Cooperation in April 2019.

On his part, State Councillor and Minister for Foreign Affairs of China, Mr. Wang Yi, earlier read a congratulatory message from China's President Xi Jinping at the opening ceremony, where he wished delegates all the best during their deliberations.

The congratulatory message also recalled last year's FOCAC and the various areas it touched on and said it among others, sought to produce a blueprint for the future of China-Africa relations.

On his own, Mr. Yi said no matter what the international situation becomes, China and Africa will continue to ensure peace and mutual development and move the relations between the two continents to a new level.

He observed that China and Africa had a lot in common, saying they both needed to move forward together and endeavour to enhance intellectual support and guard against bullyism among others.

The Minister for Foreign Affairs and Senegalese Abroad, who is also the Co-Chair of the Forum, Mr Amadou Ba, mentioned such factors as prioritization of projects, safety and security and the organisation of workshops, in the cooperation between China and Africa.

He stressed the importance of focusing on the shared future.

The President of Uganda, Mr. Yoweri Kaguta Museveni, who was the guest of honour, traced the history of the relationship between China and Africa the early 1900s and said the relationship is not new, but has been intensified.

He commended all countries who have contributed to the positive growth, stressing, it was crucial to move the relationship further for the needed results.

The 2nd Coordinators' meeting was chaired by the Assistant Minister of Foreign Affairs of China, Mr Chen Xiaodong.