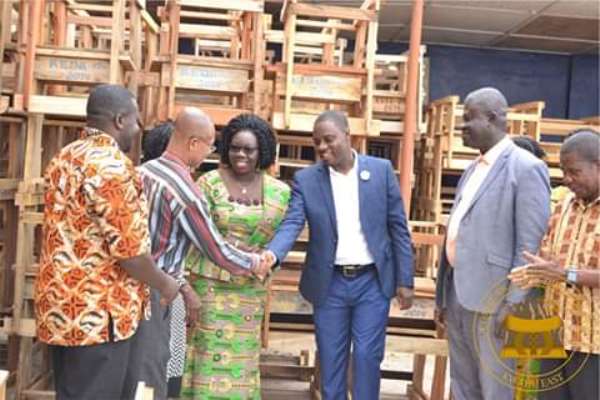 The move is in fulfilment of a promise the Member of Parliament, Hon. Bryan Acheampong made to the Kwahu East Education Directorate to donate a total of 2,500 mono and dual desks.

He promised to donate the remaining 1,500.

Speaking on the sidelines of the donation, Hon. Isaac Agyepong noted, “We made the donation to the education directorate in order to address the furniture deficit that has bedeviled most of the Basic Schools in Kwahu East”.

According to Hon. Isaac Agyapong, they will continue to help Kwahu East Education Directorate out of the desire that an educated workforce is the foundation of every community and the future of every economy,

Mr. Isaac Agyapong further assured that the District Assembly, together with the Bryan Acheampong would continue to support deprived communities in the area.

The District Director of Education commended the District Chief Executive and the Honorable Member of Parliament for the kind gesture.