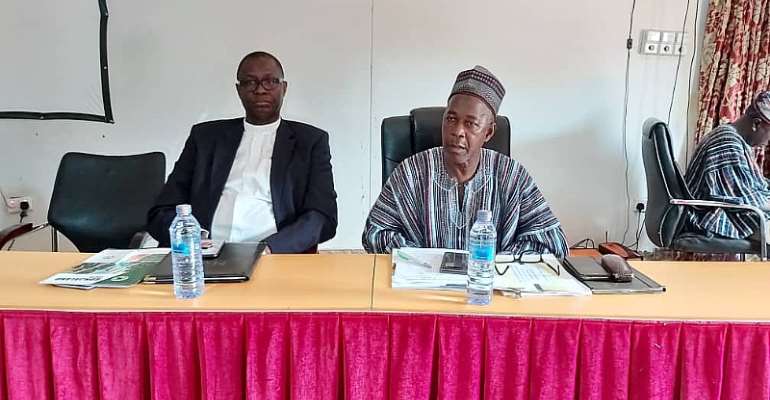 The Executive Director of the Center for Conflict Transformation And Peace Studies I'm Damongo, Reverend Father Clement M. Aapengnuo has cautioned the chiefs and people of the Gonja Kingdom to be mindful of the falling of the kingdom following Chieftaincy conflicts in Gonjaland.

Speaking at a seminar on leadership, dispute resolution and the justice system of Ghana for Chiefs and opinion leaders in Savannah Region held in Damongo on the topic, "Alternative Dispute Resolution (ADR): A Tool for Conflict Management And Conflict Coexistence," Reverend Father Clement said chiefs must follow the right laid down procedures to become chiefs since that will end all the problems of chieftaincy disputes in the kingdom.

He said Gonjaland was used as a case study in enskining Chiefs in the Northern region whenever there was a chieftaincy issue in any part of the region with chiefs coming to Damongo to learn from the Overlord of the Gonja Kingdom the Yagbonwura. Today he bows his head down in shame over the rampant chieftaincy clashes.

Father Clement admonishes the chiefs and people of the area to learn from what conflicts has retrogressed the development of some other kingdoms and put a big stop to the various chieftaincy problems in the new region.

Touching on the cutting of rosewood in the Savannah region, father Clement said he is not against that but much concerned about how many of the youth of the area are unemployed yet containers of rosewood leave the region on daily basis.

He said if the ban on cutting down trees is properly adhered to, it can bring back all the rosewood that has been cut back in the next 10 years calling for the introduction of taxes on every tree that has been cut including the factory that is processing this rosewood with the money used to develop Savannah region.

The one day seminar was organized by the Gonjaland Youth Association which saw many people including chiefs and opinion leaders in attendance.

Other speakers at the seminar include Alhaji Bakari Sadique Nyari, former board chairman for Lands Commission who also spoke on the role of a contemporary chief in ensuring sustainable development.

His Lordship Justice Francis Achibonga, a high court judge in Mampong in the Ashanti region of Ghana also spoke on chieftaincy and the justice system in Ghana.

The district chief executive for West Gonja, Hon. Saeed Jebreel l who stood in for the Savanna Regional Minister advised and advocated for a peaceful Kingdom since without peace, there will be no development.

The Paramount Chief of the Buipe traditional area, Buipewura Abdulai Jinapor who represented the Yabonwura said for over 400 years of Gonja existence, Gonjas have never had this seminar sort of engagement and wish on behalf of Yagbonwura to applaud the executives of GLYA for this novelty and encourage them to keep it up.

Furnish us with Ejura committee’s report – Families of kille...
4 minutes ago