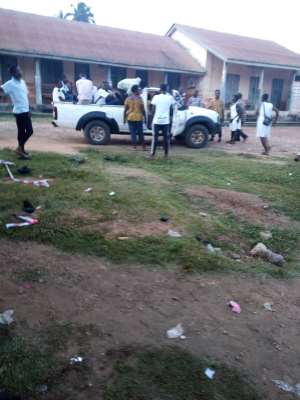 Is it the case of George Orwell's animal farm? Where the four-legged animals are considered more important than the two-legged, and occupy relatively some sensitive positions in the jungle? Or a sheer wicked and selective approach to plan and manipulate the electoral system to deny the teeming eighteen- year old youths -and the first time would -be voters access to their identity?

*Since Limited Voter Registration started on the 17th June,2019 till now, the NPP has used and is still using the Municipal Assembly Pickup with Registration Number GE 4610X to transport young once organized by their Vice Chairman Wofa Yaw Bekye,Sis Naomi(NPP Constituency Women Organizer),Mr.Joseph Tsetse Arthur(Dada-Ba), who is aTreasurer and Aide to the Mfantseman Municipal Chief Executive, Hon.Kenneth Kelly (K. K) Essuman.*

We are of strong conviction that National Exercise of this kind should not be taken as NPP Exercise where only the people they organize alone should be conveyed to the Registration Centre at Saltpond EC Office detached to Municipal Magistrate Court knowing full well their faceless and ill-motive agenda to deny some Ghanaians access to their identities.

The fact remains that,if the NPP Elements want to genuinely help the frustrated would-be first time voters for using their little resources that could be used to make ends meat (survive) -they would have made good attempt to inform the public through the Assembly Information Van or maybe through the Cheifs,and Assembly Members for the town Criers to do the needful.

Which is none to wiser
Is it a ploy by Nana Addo,MM/DCEs and NPP Constituency Executives to deny some Ghanaians their true identity? Or its because they think only the known Osono Party Members( NPP) pay taxes and that they alone must and

should enjoy the Assembly Resources - what a Wicked and Selective Evil Approach.

Instead of using the Assembly Resources to benefit all despite your Neponistic, Family and Friends,Unfulfilled promise spree et cetera,et cetera you are rather wasting general taxes -some of which are useless, but the hungry and frustrated Ghanaians continue to pay regardless,for want of seeing development.

We want to caution the MM/DCEs and the NPP office holders who are bent on denying us(people) access to get involved in 2020 general elections, that,we will resist any elimination by rough tactics until they think and behave Ghanaian.

We reminiscent for a fact as much as Ghanaians know much adequate of your bad performance as a government,NPP for that matter,which do not hesitate to sell our fortunes for a mess of portage.

Never again would we allow the so called high-land tribes to employ divisionary schemes to further wound their already stinking pride - a very worrying and sad devlepment of a kind.

We don't want to believe that the Osono Party (NPP) want to tell us that the fiction 'Animal Farm' by George Orwell is still applicable in the era of Prez.Nana Addo Danquah Akufo Addo,and his cotorie(appointees, MPs and Party Office holders)

We are by this sending a notice and caution to MM/DCEs,MPs,NPP Elements etc: either they provide more vehicles to convey everyone due for registration across the board or anticipate our wrath through out the Registration Period.

We again thank the various EC officials across the Country,and admonish them not to compromise on discharging their duties.