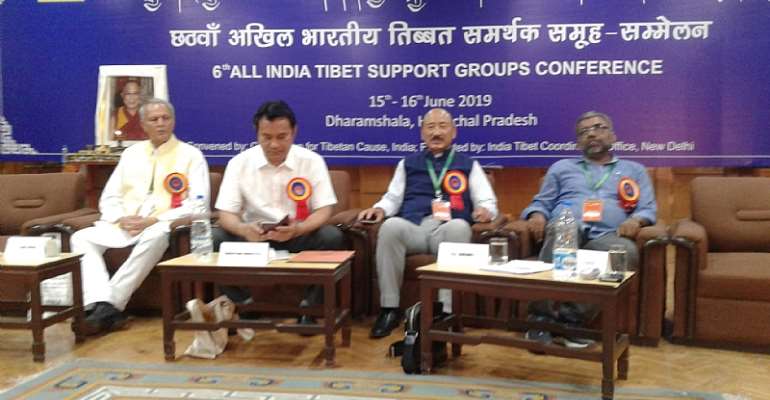 Indian supporters for a free Tibet have urged the Union government in New Delhi to confer Bharat Ratna, the country’s highest civilian honour, on the Tibetan spiritual leader His Holiness the 14th Dalai Lama for his immense contributions in creating goodwill for India in the last six decades.

In a declaration, adopted in the 6th All India Tibet Support Groups’ Conference held on 15 and 16 June in Dharamshala township of Himachal Pradesh under the chairmanship of Rinchin Khandu Khrimey, national convener of Core Group for Tibetan Cause (CGTC), it was accomplished that the Nobel laureate continues to be a holy ambassador of Indian culture enriched with non-violence, compassion and religious harmony.

The Dharamshala declaration also called upon New Delhi to prevail over the People’s Republic of China for a constructive negotiation with the representatives of Central Tibetan Administration (formerly Tibetan government in exile) under the guidance of Dalai Lama for the sustainable solution of Tibet issue.

It also appealed to the international community to support the Dharamshala based CTA in its relentless pursuit for a peaceful resolution to Tibetan issues comprising the quest of millions of Tibetans (inside and outside Tibet) for dignity, justice and peace in their land, which has been occupied by the Communist regime in Beijing

since 1959.
The declaration insisted on complete freedom of language and culture pursued by the Tibetan Buddhists with an end to repressions over the people and exploitations of natural resources inside Tibet which might have severe ecological implications to various neighbouring countries like India, Bangladesh, Myanmar, Cambodia, Thailand etc.

Over 200 delegates from 21 States of India, while attending the two-day conference, organized by the CGTC, an apex coordinating body of Tibet support groups in India and facilitated by the India Tibet Coordination Office in New Delhi, strongly condemned the Chinese government for systemic violations of human rights under its illegal

occupation over the land of Dalai Lama and also the militarization of Tibetan plateau threatening the peace across the Indian sub-continent.

Mentioning about the Kolkata convention, Dr Anand Kumar, general secretary, India Tibet Friendship Society, commented that the little assembly of responsible citizens helped nurturing a big river of consciousness, humanity and solidarity for Tibetan causes in present time. He also termed the Tibetan transition as remarkable for their wisdom, commitment and resilience against a mightiest empire in the world.

Addressing the inaugural session, Indresh Kumar, patron of Bharat Tibbat Sahyog Manch, termed Beijing’s recent political and military advances as a threat to India’s national security. He disclosed that the conflict-ridden India-China border was once used to be a friendly boundary between India and Tibet. An ideologist of Rashtriya Swayang Sewak, Kumar however asserted that New Delhi won’t deter from taking strong actions against the Chinese advance. Earlier delivering the keynote address, Tibetan leader Dr Lobsang Sangay expressed his warmth and gratitude to India and its people for generous supports to the Tibetan authority saying that no other country has done (or can do) more than India and none could be helpful for Tibet than the people of India. CTA President Sangay explained about the middle way approach for resolving Tibetan issues.

A Hindi translation of Sangay’s boot tilted ‘Tibet was Never Part of China but the Middle Way Approach Remains a Viable Solution’ was released in the function, where the bright and highly educated Tibetan leader highlighted on their demand for the genuine autonomy for Tibetan people with emphasizes on constitutional rights for preserving their distinct language and culture. Khrimey, a former Parliamentarian from Arunachal Pradesh, expressed

confidence that Dalai Lama would get the opportunity to return to Potala of Lasha in his life time with dignity and prides. He however disclosed that people of northeast India would prefer His Holiness to return to Lasha through the same route through Arunachal borer as he took sixty years back. Others who spoke in the conference included Dr Abanti Bhattacharya, professor on Chinese Studies in Delhi University, Prof Ramu Manivannam from Madras University, Thinlay Chukki, CTA information & international relations officer, Dechen Palmo, CTA research fellow,

The author is a Guwahati (northeast India) based journalist

Anti-LGBT Bill: Let's be careful and not generate intense ha...
34 minutes ago