How Lucky To Be A Street Preacher In Ghana? 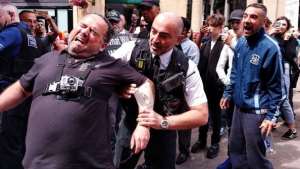 On many occasions, I have been part of a group or passengers listening to preachers who either join commercial vehicles or stand at street corners preaching the gospel. Some are very good in preaching and know much about the bible to the extent that you may receive the 'holy ghost' on the spot during preaching.

Like the numerous mushroom churches all over Ghana, the same there are preachers everywhere in Ghana. However, it’s sad to note that in Europe and other places across the globe it’s an offence to preach on the street.

In Europe and many countries across the world, including Canada, it’s illegal to share the Gospel of Jesus Christ. The police continue to arrest street preachers who are just sharing the gospel as Jesus had commanded, “Go into all the world and preach the gospel to all creation.”- Mark 15:16

In Antwerp, Belgium, central station, stands an African who preaches the gospel, I can’t mention how many times he has been confronted by the police to drive him away, amidst warnings but this African wouldn’t like the police to intimidate him.

Before sharing the gospel, he will first survey the whole area and when he is satisfied that there is no police around, he quickly starts his preaching. His voice is very powerful that you can hear him from afar. That powerful voice quickly notifies the police that African preacher is around.

Since he has adopted the habit ‘watch and pray,’ he sees the police first and quickly disappears with his bible before he gets arrested. If you ask the police why they are after him, the response they give is: “It’s not allowed because he is disturbing the public’s peace.”

Disturbing the public’s peace? Let the police go to Ghana and see how many street preachers they will arrest in a day if given that task. It’s really sad that love for God is growing cold in many advanced countries across the globe.

In China, Christians are treated worse than criminals as the Chinese government has declared war on Christians. Surprisingly, some Chinese migrants are enjoying peace in African countries, such as Kenya, as they gather to pray and preach the gospel.

A street preacher arrested in Scotland

In another development, a florist who refuses to prepare flowers for a gay couple, due to her religious, belief has been charged for discrimination to appear before the magistrate in the United States of America.

Strange things happening across the globe signify the end of times or signs of the last days, however, there is no need to fear because the great teacher himself said: You will be hated by everyone because of me, but the one who stands firm to the end will be saved.”- Matthew 10: 22