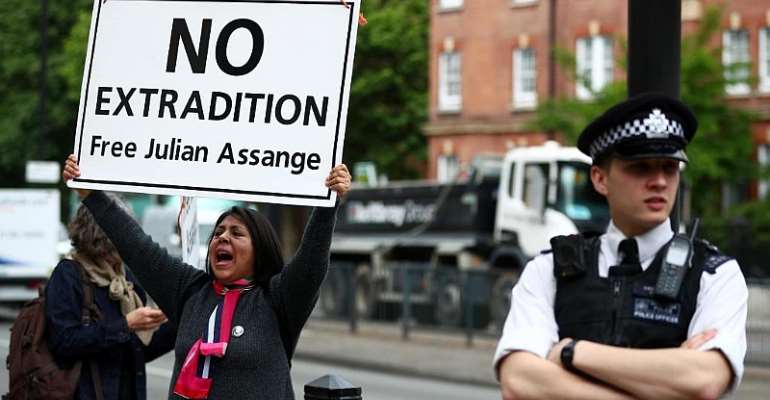 A London court has ruled that WikiLeaks founder Julian Assange, wanted in the United States for a raft of charges including espionage, will face a full extradition hearing in February.

Assange is currently serving a 50-week prison sentence in a London prison for skipping bail by fleeing to the embassy in 2012 when he was wanted on accusations of sexual assault in Sweden.

"It is important that people aren't fooled into believing that WikiLeaks is anything but a publisher," Assange told Westminster Magistrates' Court on Friday via video link in Belmarsh prison.

"The US government has tried to mislead the press," the 47-year-old said.

Among the 18 charges he is facing, he is accused of conspiring to hack government computers, including hacking a Defence department password.

“I didn't hack anything,” Assange responded to the charge.

The charges stem from WikiLeaks publishing hundreds of thousands secret US diplomatic cables in 2010, including the names of confidential government informants.

Ben Brandon, the lawyer representing the US, told the court, "by publishing the unredacted material, Mr Assange created grave and imminent risk that many intelligence sources, including journalists, human rights defenders and political activists would suffer serious physical harm or arbitrary detention."

Assange is considered a hero by some for shedding light on what they consider the US abuse of power on the world stage. His backers and lawyers maintain that he is defending freedom of the press.

The US charges are an "outrageous and full fronted assault on journalist rights and free speech," said Assange lawyer Mark Summers.

Summers added that Assange had been ill, but was being treated and did not specify the cause of his sickness.

The WikiLeaks founder fled to the Ecuadorian embassy in 2012, claiming that Sweden was pursuing politically motivated rape allegations against him.

Assange was removed from the embassy on 11 April against his will after Quito terminated his sanctuary request, and subsequently jailed him in London. The US put in its extradition request soon after.

The hearing will start on 25 February 2020 and last about five days, according to Judge Emma Arbuthnot. Assange will be able to appeal the ruling.