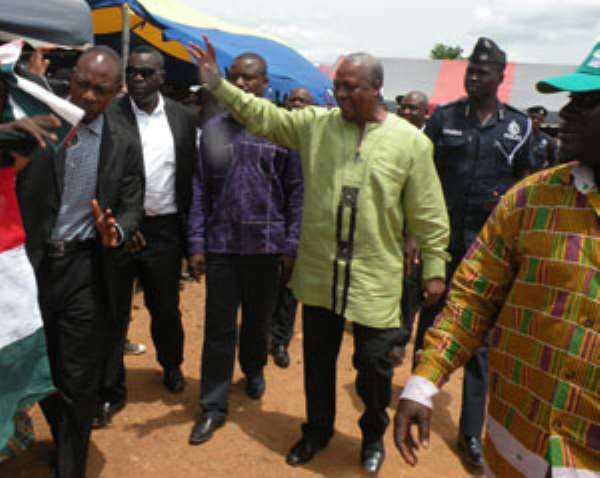 To be elected as a president of a country is a life time privilege which comes with juicy trappings and enormous responsibilities.

Ideally, though, someone with vast life experience, a catalogue of suitable employable skills, a portfolio of relevant qualifications, tried and tested competency and requisite knowledge should be a suitable candidate for the position, given the absolute importance attached to the presidency.

Nevertheless, the emergence of democracy has energised every sound adult Ghanaian to compete for such an important position.

Regrettably, however, we are, more often than not, been electing ‘a semicircle’ of negligent officials whose only preoccupation is to sink the nation deeper and deeper into the mire.

But all said and done, it would be absolutely wrong for anyone to suggest for a moment that every leader can prudently steer the nation to the right direction if given the opportunity.

In fact, it is somewhat specious for sceptics to argue that all politicians are the same when in power and therefore there is no need to change from one to another.

All the same, the sceptics feeling of indignation with the current political dynamics is something shared by many Ghanaian electorates.

But that said, the critics disposition appears somewhat impetuous, because politicians have different levels of temperament, competence, experience, knowledge, skills and abilities, so they are never the same, as a matter of fact.

In fact, there is enough evidence to counter the sceptics who insist that politicians are the same when in power.

The previously single digit inflation and budget deficit doubled astronomically. To be quite honest, Ghana went into the throes of economic collapse due to mismanagement and wanton corruption under the leadership of Ex-President Mahama.

Likewise, it will be extremely unfair to put Akufo-Addo and Mahama in the same basket.

This is because, the former has prudently introduced important policies and programmes in less than three years in power, while the later failed to introduce a single social intervention in eight years.

In addition, under Akufo-Addo’s presidency, Ghana’s economic growth has moved from a disappointing 3.4% under former President Mahama to around 8%.

And the previously double digit inflation (15.8 in December 2016) has been reduced drastically to around 9.5% as I write.

There is no denying or hiding the fact that the erstwhile NDC government wilfully cancelled/collapsed the Nurse’s Allowance, the Teacher’s Allowance, SADA, GYEEDA, NHIS, the Maternal Care, the School Feeding programme, the Mass Transport System, amongst others.

Let us therefore be honest, it is not entirely correct for anyone to assume that all politicians are the same, once they are in their comfort zones, and therefore it is a complete waste of time to go out there and vote.

In ending, Ghanaians should not make the calamitous mistake by putting all politicians in one basket and rejecting a charismatic leader who can put forward expedient policies such as one district one factory, one village one dam, one constituency one million dollars, Free SHS amongst others.