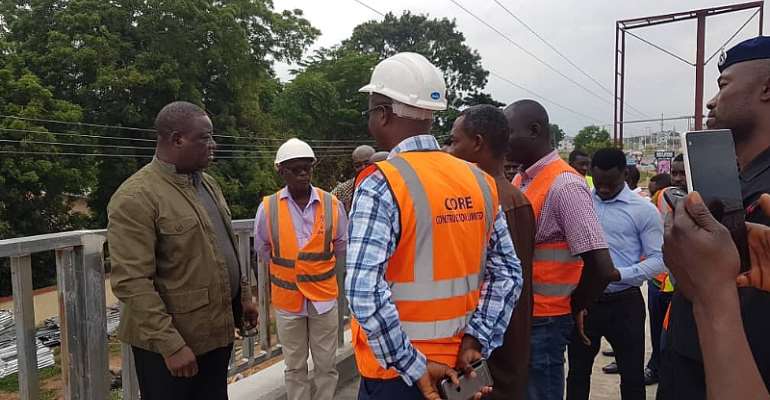 The Minister of Roads and Highways Mr. Kwesi Amoako Atta on Monday inspected construction works at the Madina-Adenta Road Footbridge Project, as part of his one-day tour.

The project forms part of the Tetteh Quarshie–Mamfe Road project, which includes the construction of access ramps to footbridges on the 5.6 kilometre Madina – Pantang Section of the road.

The six uncompleted footbridges on the stretch, recently, generated discontent among Ghanaians, particularly among residents of Madina-Adentan, which attracted daily discussions on the airwaves –radio, television, and newspapers.

The work on the footbridges, which began during the previous government eight years ago, stalled due to constructural and financial challenges.

The Procurement processes – which coincided with demonstrations by residents of Madina and Adentan, and, radio discussions, kick-started the construction of the footbridges to reduce or possible end those accidents.

The Minister of Roads and Highways, Kwasi Amoako-Atta noted that the project will be fully Completed and to ready to commission by the end of June 2019.

"I have been assured that by the end of the month, all of them will be put into human use"

He charged the six contractors working on the six footbridges on the Madina-Adentan Highway to work day and night in order to meet the given deadline.

He added that the ministry's safety department will be working with the ministry of transport and national road safety commission to provide light on the bridges in order to ensure safety.

He further added that, "the bridges will be painted at it completion stage to make it disability friendly for all" he added.

In an interview with the press, Mr. Kwesi Amoako Atta underscored that the government is committed to completing the project on time.

“The President has this project at heart and that is why he gave the contract to six different contractors to enable them to clock the required deadline.”

The Minister of Roads and Highways who toured the area to inspect the progress of work on the highway also appealed to the residents of Adenta to exercise patience. He also tasked the residents to make use of footbridge to avoid any accident in the area.