In Defense Of The President - Nana Addo Dankwa Akuffo Addo 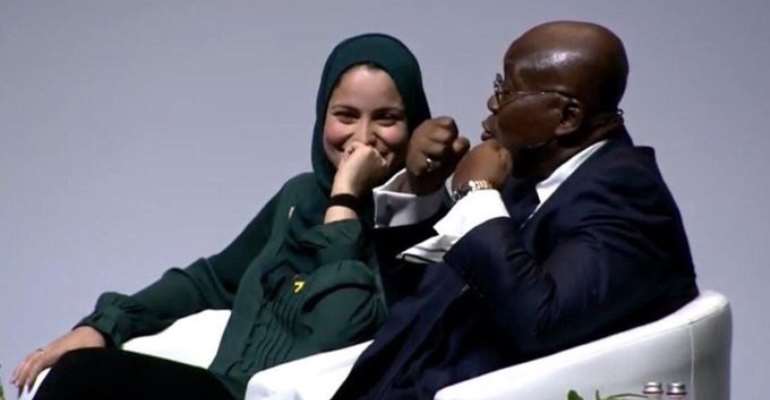 I must put on record that I am not a communication expert notwithstanding, I will like to use common sense to critically analyse the president’s speech at the ‘women’s deliver’ in Canada. I write to defend the president and I will do that in the face of Natasha’s wonderful and inspirational speech of which the President of Ghana was asked to response to.

I must emphasize that the President of Ghana was specifically, asked to react to Natasha’s speech. I believe this will help many Ghanaians to appreciate why the president of the republic, chose that line. It would be good to highlight some of the excerpts from Natasha’s speech for better understanding. She says:

The president hastens to add that in as much as a lot is going on in the country to empower women, in his two years’ experience, he has not seen enough movement of women dynamism in Ghana. Which implies that he wants to see more of dynamism from women. To paraphrase the president’s words, the advocacy for women empowerment is not about sitting on round-table discussions and being wishful. Rather, women should find their way into decision making table where they could actually push and amplify their course. For him, most of the radical changes that we have experienced in the world, came as a result of political agitations and struggles and for that matter, women must use their collective power to effect the change they want.

Since, the president has come under massive attack from most of the women’s movements in the country especially and across the world. The opposition NDC too, has taking advantage to score political point. I therefore, suggest to the president’s critiques that their criticisms are unfounded and intellectually, inadequate. The following are my reasons:

As I earlier indicated, my defence of the president is simply using Natasha’s speech of which the president was asked to response to. As I critically listened to Natasha’s speech as I have numerated almost the major substances of it above, I must say that her speech and that of the president’s own is compatible. The two are saying the same thing with different vocabulary and power. what is the difference between; ‘We ourselves (women) ought to take charge and influence whatever is going on’ and the president’s call for enough dynamism and the fight to be in position of influence and decision-making?

Again, I can confidently say that paying attention to Natasha’s speech, apart from calling women to take charge and influence whatever is going on, the remaining call she made was wishful and that is exactly what the president drew their attention to. Assuming that Mr B and Madam C live together as partners. Madam C depends on Mr B to flourish since she has nothing on her own. She constantly prepares fufu for Mr B in order to have her daily dinner. Meanwhile, Madam C hates fufu but she wishes that Mr B will change the fufu Menu to jollof which is her favourite. The day Madam C starts earning income, she could influence the menu of her own.

From the scenario above, Madam C’s wishful mindset will be translated to reality by walking her way to income earning. Also, in business, the one with the highest shares receive the highest dividends and that, one is able to make the necessary change and decision in that particular business. In much the way that our Ghanaian women should find their way into positions of influence in order to translate those wishful thoughts into reality. Of course, some men are willing to help.

In any case, if women think that the use of the operative word ‘not enough’ dynamism is a problematic, then, the women are suggesting that they are dynamic enough and probably have answers to their problems. I would want to put it to them ‘why then we have much talk about gender equity and women empowerment?’ ‘Why do they admit that there are cultural, social and constitutional barriers to their progress?’ These admissions imply that not enough has been done which implies further that they (women) ought to do more to ensure that enough is done. Does it contradict the president’s position?

On one hand, we hear more ought to be done to empower women. On the other hand, we are dynamic enough and the president call is inaccurate. Clearly, this is contradiction. You can be and cannot be. Admittedly, the president speech does not suggest that Ghanaian women are not dynamic at all. Probably, the various women movements wanted to hear sweet words from the president which will eventually, hide the reality.

Personally, I found nothing wrong with the president’s speech, he was honest in his response to Natasha, and instead of trying to exacerbate ghost scenario and draw non existence political capital, the women should begin to think of how they could use their quarters to amplify their voice and locate themselves in decision-making arena. After all, the president’s track record on gender equity and women empowerment is there for everyone to see. Unless we decide to be mischievous and crucify honesty at the table of politics. My take!!!