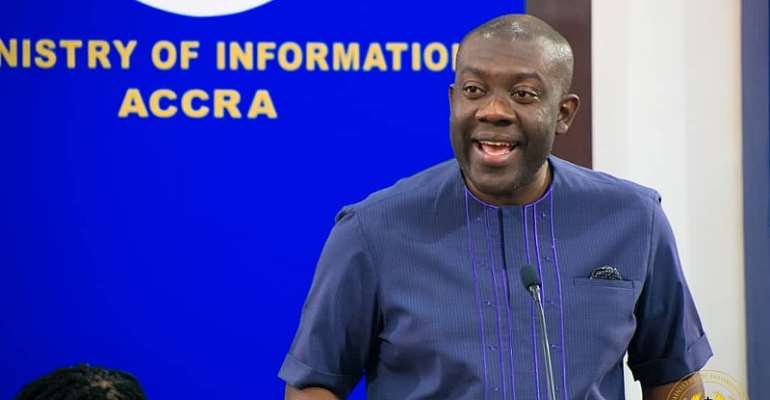 President Akufo-Addo's administration has denied borrowing an amount of Gh₵80bn in two-and-half years as claimed by the opposition National Democratic Congress (NDC) in Parliament.

It would be recalled that the Minority in Parliament recently accused the New Patriotic Party's (NPP) administration of borrowing a whopping Ghc 80 billion and not having any tangible infrastructural projects to show for it.

But Information Minister, Kojo Oppong Nkrumah, addressing journalists on Friday, June 7, 2019, in Accra, described the Minority's claim as a “palpable untruth” which should not be taken seriously.

According to him, the Ghanaian financial market was not liquid to raise Gh₵ 80 billion within two and half years.

The Minister said “now with regards to external loans, all of those loans are given approvals by Parliament in accordance with Article 181 of the Constitution 1992 and Sections 55, 56, 57 of the Public Financial Management Act, Act 921 for which the Minority is party and you can add all the loans that this administration has taken to Parliament and it will not come anywhere near G₵ 80 billion. ”

He indicated that “indeed, if there is a list of loans that add up to Gh₵ 80 billion, you will imagine that the Minority would put out that list by now. But the reason for which our debt stock today would show a difference of about Ghc 80 billion is that the figure is a nominal public debt stock figure.”

He added that “And I will give you an example, if you take for example the railway works between Tema and Mpakadan which is financed by an Indian EXIM facility, every new one dollar that they release, is added to our debt stock. Did the Akufo-Addo borrow that money? No!”

He stressed that “so you cannot look at the growth in debt stock and say the administration has borrowed money.”

He also blamed the shift in the exchange rate for the growth in the debt stock, “number three, you will notice since 2017, we have had a number of extraordinary events that the administration has had to borrow specifically to deal with.”

According to the Information Minister, “The bailout of the financial services sector alone has already cost us some Ghc 12 billion and if you add what is outstanding to be done, the figure may even go up, a bit higher than that.”

“So who superintended that exercise? It doesn't necessarily mean Government has gone to borrow some money and therefore must show infrastructural projects for it.”

He recounted that during the IMF's program, there was a cap that the Ghana Government cannot borrow more than $500 million a year.

He also indicated that the Budget has a limit on how much government can borrow in terms of commercial loans and the amount he stated was around $500 million to $ 700 million.