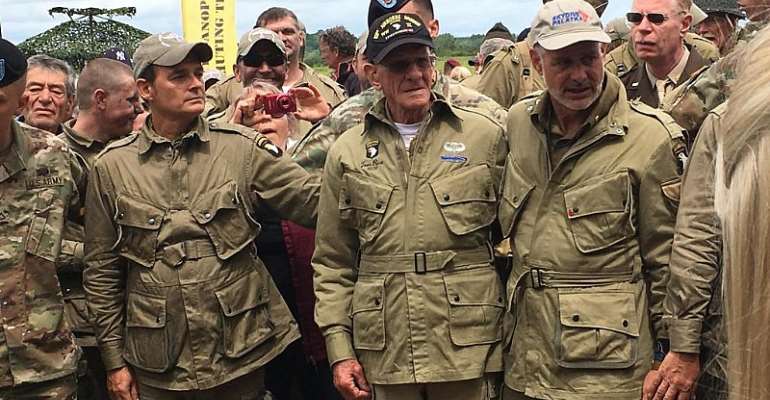 American paratrooper Tom Rice on Wednesday jumped from a warplane over Normandy, northwest France, just as he did 75 years ago during the D-Day parachute landings. The reenactment was part of commemorations of the 6 June 1944, which heralded the turning point in World War II.

Despite being about seven decades older than his fellow parachutists, Rice and 140 others leapt from warplanes that flew over a field just outside of Carentan, in the Manche department of France's region of Normandy.

Their parachutes opened and descended to the drop zone, not far from a gathering of a few thousand onlookers from France, the US and elsewhere.

After Rice's decent, he made his way around the area, speaking with fellow veterans, young admirers and many journalists.

Rice lives in California and goes on regular skydiving trips to Montpellier in the south of France.

“There's a lot of tension on the shoulders and arms and legs, so we did about four months of physical exercise,” he said.

A symbolic event
Rice was with the 101st Airborne Division of the US Air Force and was one of more than 13,000 American paratroopers deployed in the D-Day invasion.

On 5 June 1944, he embarked on a Douglas C-47 and landed somewhere around Carentan in the early hours of D-Day, though he is not sure precisely where.

The image of the descending paratrooper, whose first mission was to secure movement of troops between Utah and Omaha beaches, is what has persisted in collective memory of the Second World War.

In the US, it has inspired films like Saving Private Ryan and television series such as Band of Brothers. In France, it is inspiring a growing number of annual commemorations.

“It's very symbolic of the invasion of Normandy: thirteen thousand American paratroopers jumped on D-Day, so to have even a few hundred jumping brings back the image,” said Denis van den Brink, an organiser of the event.

“For the younger generations, maybe it will give them the desire to go further into history and find out what happened here 75 years ago.”

Representing a generation
Reenactments over Carentan have become more common in recent years, and veterans themselves have been returning more frequently, even though most of them remain on the ground.

“The first time I came back, a little boy came up to me, shook my hand and said 'thank you for our freedom,'” said Vincent J. Speranza, 94, another 101st Airborne veteran who first returned to Europe about ten years ago.

“I just suddenly realised that maybe we did something in 1945, but the people of Europe have not forgotten.”

The US veterans also describe the role they play coming to Europe for commemorations.

“I represent a whole generation, the whole USA,” Rice said. “So if I do something wrong here, the world will know about it.”