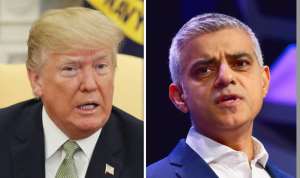 The verbal war between Donald Trump and London's Mayor Khan continues. After a Twitter attack by the US president, the mayor reads the head of state to the Levite(s).

London Mayor Sadiq Khan has responded to US President Donald Trump's "total failure" attack on his person. To kick off Trump's three-day state visit to the UK, Khan gave the US president a lesson in women's rights. "Their values ​​and what you stand for are the exact opposite of the values ​​of London and the values ​​in that country," the Labor politician said in a nearly two-minute video he posted on his Twitter account on Monday.

Khan went on to say that diversity is a strength, not a weakness. "We respect women and think they are equal to men," he said. Trump has received much criticism in Britain for his misogynistic comments.

Trump had cursed Khan for launching his state visit as a "stone cold loser," which "should focus on crime in London, not me." Even before landing at Stansted Airport, Trump said from the presidential aircraft, Air Force One, "Mayor Khan, who, according to all that has been said, has done a terrible job as mayor of London, nasty president of the United States, is by far the most important ally of the United Kingdom".

The Twitter attack from Trump to the Mayor of London, Sadiq Khan:

Donald J. Trump
✔ @realDonaldTrump
. @ SadiqKhan, who has been a mayor of London, has been foolishly "nasty" to the visiting President of the United States, by far the most important ally of the United Kingdom. He is a stone cold loser who should focus on crime in London, not me ...

114K
8:51 AM - Jun 3, 2019
Trump's Twitter attack was preceded by a sharp criticism by Khan of the US president. The Mayor of London compared Trump's language on Sunday to that of "fascists of the 20th century". Trump is increasingly a "global threat," said the mayor of London. Both politicians had delivered multiple verbal skirmishes in the past.

Trump and First Lady Melania were received at noon by Queen Elizabeth II at Buckingham Palace. For the evening, a state banquet was planned in honor of the US president. Labor leader Jeremy Corbyn had canceled his participation in protest. Especially on Tuesday is expected with demonstrations against Trump in London.