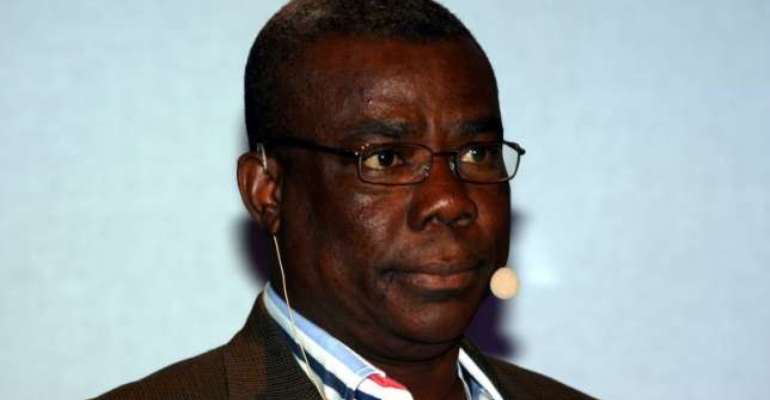 THE move by some aggrieved faceless workers of Ghana Ports and Harbours Authority (GPHA), to malign the Board Chairman of the GPHA, Mr Peter Mac Manu with alleged claims that he faced allegations of conflict of interest and outright bias in the scandalous US$1.5 billion concession agreement with Meridian Port Services Limited (MPSL) has completely hit a snag and rock.

The recent what can be described as a "dirty' splot hatched by the workers of GPHA against Mr Mac Manu in the media reports surfaced on ghananweb on Thursday May 30, 2019 which was sourced to the asempanews.com, under the headlined; "Mac Manu fingered in US $1.5 billion MPS deal," aimed at criminalising him.

But painstaking investigations conducted by Today collaborated with the information from the corridors of the power and GHPA have confirmed that Mr Mac Manu has not committed any crime.

In summary, the report claimed that Mr Mac Manu has been described by the aggrieved workers of GPHA as a wolf in sheep's clothing, as he has been clandestinely lobbying the presidency for the deal to be left unchanged, to the detriment of the Ghanaian workers.

According to the workers, the board chairman by virtue of accepting to serve on the MPS board has compromised his position, therefore, cannot be serving the role of a peacemaker in the impasse.

”The hands of Mac Manu are already soiled! He can never be the one to lead the process of appraising the contract hence the need for him to purge himself. Mr Mac Manu can't be the suppose arbiter whiles serving on the two boards.

”So far Mr. Mac Manu has been successful. He has found allies in government. Ministers of State are quick to point out the “loopholes” in the arguments of GPHA including figures presented by the Authority.

”They do so with no alternative figures, simply dismissing the claims of the State Agency – GPHA–mandated to build and operate ports in Ghana. Today, the authors of the Inter-Ministerial Committee Report have all gone quite. Their silence is deafening. Posterity will hear their loud silence,” the irate workers furiously stated.

But the document intercepted by Today in connection of the implementation of the contractual agreement between government and MPSL at Tema Port has exonerated Mr. Mac Manu from any wrong doing in MPSL deal as claimed by workers and the critics.

The one-page document clarified that the US$ 1.5 billion contractual agreement of MPSL was legally signed by the former Director-General of GPHA, Mr Richard A.Y. Anamoo with the Chief Executive Officer (CEO) of MPSL, Mr Mohammed Samara on June 12, 2015.

The document stated that the signing of MPSL agreement was being witnessed by the former Board Chairman of GPHA, Mr Samuel Ofosu Ampofo and some other representatives of the MPSL

Government of Ghana through GHPA in 2015 negotiated the 35 years contract with the MPS for the development and operationalisation of a multipurpose container terminal at the Tema Port, Today has discovered.

The deal, Today learnt was aimed at creating a deeper vessel capacity with an accompanying container storage facility as parts of efforts to position Ghana's ports as a hub within the West African sub-region.

However, speaking in an interview with Today to set the records straight on the matter, Mr Mac Manu denied allegations that he attempted to lobby the presidency for the US$ 1.5 billion MPSL deal to be left unchanged.

He reiterated that "the US$1.5 billion agreement was signed by the previous Board Directors of GPHA under the chairmanship of Mr Samuel Ofosu Ampofo and that "we come to correct any anomaly on the MPSL agreement."

"So why is the allegations that Mac Manu fingered in MPS deal,? he rhetorically asked and stated that such allegations against him was made by his critics and the workers just to throw the dusts onto the faces of Ghanaians.

The senior politician stressed that being the law abiding citizen who contributed his quota to the socio-economic development of Ghanaians at large, he would be the last person to do something that could land himself in the financial malfeasance.

He also denied of compromising his position as the Board Chairman of GHPA by way of accepting to serve on the board of MPSL, saying that such allegations were made by the workers and his critics out of ignorance.

According to him, the decision to add him to the board of MPSL was legal on the fact that the GPHA currently has 30 per-cent shares in MPS and that GPHA is entitled to two seats on the MPS board as stipulated in the MPS working constitution.

"So if the shareholders of GPHA have decided to put me on the board of MPS, then where lies in the conflict of interest here?, Mr Mac Manu further asked.

In the record, he indicated that "the GPHA workers have always had one representation on the GPHA board as per the GPHA Act, (PNDC Law 160,1986) and had been present in June 2015 when the then Board Chairman of GPHA, Samuel Ofosu Ampofo who is now National Chairman of NDC signed the concession agreement.The workers didn't utter a word then until 2019....one may ask why their long silence in that regard?"

He explained that "this was same it has been done under the previous National Democratic Congress (NDC) government "so it not the new policy being designed under the current NPP administration."

According to him, the workers and the critics were up to mischief with the intention to dent his image and threatened to resist any attempt by them to further soil his reputation.

In this regard, the current GPHA Board Chairman called on Ghanaians to disgard the allegations levelled against him by faceless workers of GPHA and treat it as contempt it deserves.

However, it would be recalled that President Nana Addo Dankwa Akufo-Addo recently said he was awaiting a legal opinion and a road map for renegotiating relevant portions of the agreement after meeting representatives of the workers.