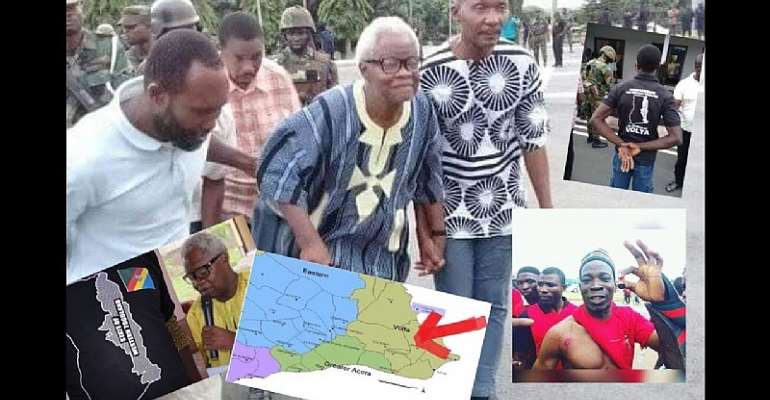 Concerned Citizens Of British/Western Togoland-USA Petitioned The Secretary-General Of The United Nations Over The Arrest And Unlawful Detention Of Staff Sergeant Kpogli Kombla Samuel And Other Western Togoland Restoration Fighters.

Attn: His Excellency, Secretary-General of the United Nations - Antonio Guterres.

UNITED NATIONS MUST STOP GHANA FROM USING STATE POWERS TO ABUSE THE RIGHTS OF SUB-SERGEANT KPOGLI KOMLA SAMUEL AND THE PEOPLE OF BRITISH/WESTERN TOGOLAND.

On behalf of the Concerned Citizens of British/Western Togoland-U.S.A, I extend to you warm greetings. We are thankful and grateful to the Lord for preserving your life and the entire United Nations Organization as you strive to create ambidextrous world for all manner of persons.

Our heats are soothing and gladden for your personal support and love that you publicly exhibited to Ghana, especially when you called prior to Ghana’s 2016 general election and spoke with then-President John Mahama and Candidate Akufo-Addo. You requested from them to ensure that they uphold the structures of democracy by accepting the outcome of the election which is the will of the people, for peace and tranquility. On a countless bases you have demonstrated that you are a true and a caring father of the world. This is exceptional love and can only be seen in people who believe in Human dignity, equal in rights and treatment, bearing in mind the UN charter article 2, paragraph 7.

The United Nations, the winners of the Second World War, especially Britain and all civilized countries are aware of the existence and circumstances that made British/Western Togoland a victim of annexation and neo-colonization. For the benefit of doubt, we refer you to UN document, T/1301, letter dated 6 March 1957 from the Minister of State for Foreign Affairs in the United Kingdom Government to the Secretary-General. It is signed by Allan Noble. It is our hope that this document find you well.

British Togoland issue is therefore a legitimate issue and international.

What the world might not be aware off is the victimization and inhumane treatment Gold Coast (now Ghana) have subjected Western Togolanders to, and we, therefore, wish to inform you and the world about some of the recent coercion and aggression by the Ghana government that has the potential to lead into unimaginable chaotic situation should Western Togolanders decide to take their pound of flesh. We know your time is essential so we shall be very brief.

We were alarmed when the joint forces of Ghana police and armed forces, armed to the teeth invaded Ho, a suburb of Western Togoland in a manner that caused panic in our women and children, arrested 8 Citizens of Western Togoland who happened to be leaders of one of the groups (Homeland Study Group Foundation) agitating for restoration of Western Togoland. These inappropriate arrests were carried out without warrant from any competent Court of jurisdiction. The victims were flown to the Capital City of Ghana-Accra, where they were detained for days without access to their family members and lawyers. One of the Victims, Mr. Charles Kormi Kudzordzi was granted bail and later joined the remaining 7 victims who are still in Ghana’s custody at the Court on 22nd May 2019, where they were charged with treason.

After the arrest of the first 8 victims, the police in Ghana went on “rampage” where they arrested 81 individuals in the Ho Township including people walking on the street or in their home for just wearing a T-shirt of the Homeland Study Group Foundation, or anyone perceived to be a member of the group. The 81 were also taken to another Court for charges that are yet to be made public.

On the 22nd may 2019, many of our Citizens from Western Togoland came to the Accra High Court where our first 8 victims were arraigned and to our surprise, Ghanaian authorities brought Staff sergeant Kpogli Komla Samuel who is a Soldier in the Ghana army alleged to have sent a voice audio to WhatsApp platform belonging to ‘restoration agitators’ about Ghana’s illegal plan to ransack Western Togolanders rooms for reasons only known to them.

Staff sergeant Kpogli Komla Samuel is a good soldier by all standards. He belongs to the 66 Artillery Unit. Based on the accusation above, he was arrested on the 6th of May 2019 in his house at Ho, at about 8: 30pm. He was locked up in police cells till the following day where he was transferred to Accra and was locked up at the Military police Headquarters’ in Burma Camp without the knowledge of his family and close relations. His right to Attorney was denied, even though it is against Ghana’s law to keep a suspect for over 48 hours.

The treatment meted out to him while in police custody, can only best be narrated by him.

Staff sergeant Kpogli is a father and a role model of 4 teenage children whose age range from 12, 8, 6, and 2.

It took a number of days after frantic efforts of S/Sgt Kpogli’s family to locate where he was kept. His wife later got a hint that her husband was being kept at Burma Camp. She went to the Police Military headquarters and cried to the authorities to allow her to see her husband but her request was severally turned down.

We are not suggesting that when a crime is committed, the perpetrator should not be punished according to law. All that we want to establish here is that, due process must be followed in S/Sgt Kpogli’s alleged case and already, the beloved husband, father and citizen S/Sgt Kpogli Komla Samuel’s right has been violated. He is a Soldier and in such cases, one would expect that the proper structures and protocol of the army would be exhausted but that did not happen in the case of S/Sgt Kpogli, instead, he was rushed to a civilian Court On 22nd May 2019 under strange circumstances and charged with treason.

Permit us to say that we are not leaving in a jungle. This is not how things are done in a civilized democratic world. Ghana authorities are setting a plot to make 4 innocent teenagers fatherless and a young widow.

We humbly appeal to you and the conscience of the world to intervene for the sake of the innocent children who would become fatherless, the vulnerable and the oppressed who have been denied justice and respect of human life.

It is our hope that our appeal meet your utmost consideration.