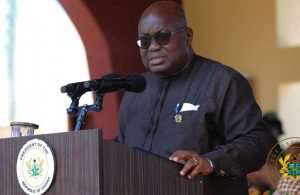 President Nana Akufo-Addo has assured that work on the Eastern corridor roads will resume in July 2019.

Residents and commuters have for some time now been urging the government to resume work on the deplorable roads which they say is negatively affecting travel on the road.

Speaking at Jasikan on day one of his tour of the Oti Region, President Akufo-Addo said the government will resolve these challenges.

“During the third quarter of this year- from July to September, you will reap the benefits of my visit. You will notice that the roads will be fixed during that period.”

A few months ago, the Minister for Roads and Highway, Mr. Kwasi Amoako-Atta announced that government is working to ensure that the entire stretch of the Eastern Corridor road is completed by the end of Nana Akufo-Addo's first term.

He said, there was going to be “a renewed effort that will be sustained to work on the Eastern Corridor.”

“It is the determination of His Excellency, the President, that by the end of the first term, the entire stretch of the Eastern Corridor will see the light of day, and I want to assure that it is receiving the attention of the government.”