The Relevance Of 'World Day Of The Boy Child'

By Concern for the boychild intiative 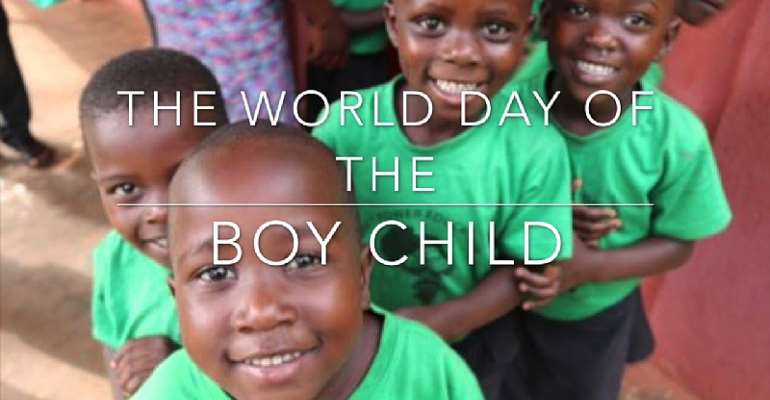 On the 16th of May 2019, Ghana will have her inaugural observance of the 'WORLD DAY OF THE BOY CHILD'.

The Theme for the global observance this year is 'SUPPORTING BOYS, RECLAIMING OUR HERITAGE'.

It is no secret that we adults are doing our boys a great disservice in terms of emotional support. For so long, society has told boys that they have to be "tough” and “strong,” and that showing emotions is “weak” and “feminine.” This often results in them not knowing how to express emotions like sadness and displeasure because they have been taught to suppress those emotions. And we all know that bottling up our emotions is never a good thing.

Research shows that boys actually need more emotional support than girls, but because of societal expectations, and gender stereotypes, we are not giving it to them. There are biological differences between the ways boys’ and girls’ brains develop. In fact, boys are more emotionally vulnerable while still in utero.

But, for some reason, we’re not talking enough about those differences, even though they’re the roadmap for the kind of emotional support we should be giving our boys. It is becoming increasingly more clear that if we don’t, we will continue to be putting our boys in danger. Because they have been raised in a society that expects a man not to show weakness ("Barima nsu"), they prefer to keep his issues to themself, and consequently end in danger. Rather than speak up and be embarrassed, they would "Be men" and deal with the issues their own way. And when their ways do not get the results they expects, the Boys feel neglected and uncared for.

He ends up using drugs, alcohol and getting involved with criminal groups for solace.

According to a study by Sebastian Kraemer, “The Fragile Male,”which was published in 2000, males are at a disadvantage from conception, long before social constructs even have a chance to come into play. According to his study, male embryos are more vulnerable to maternal stress, and male fetuses are more susceptible to things like cerebral palsy. Males are more likely to be born prematurely, with stillbirths being more common.

After birth, they are far more likely to exhibit high cortisol (the stress hormone) levels from neonatal assessments. They are also more vulnerable to birth trauma and unresponsive caregiving, which could leave them in distress. And at birth, their brains are less developed than girls by up to six weeks. Boys continue to develop at a slower pace than girls do, even as they get older. Kraemer notes, “The care of boys is generally more difficult and, therefore, more likely to go wrong, adding to the deficits already existing before birth.”

Boys sometimes seem like feral creatures — they’re loud, rambunctious, constantly moving — and it can be exhausting, even in those early months.

They need their parents and/or caregivers for emotional support.

“Young boys are taught early that expressing their emotions is taboo. This causes long-term harm to their relationships with each other and with people of the opposite gender”.

Subscribing to these archaic beliefs about how a boy is supposed to handle his feelings is what leads to them not having a proper outlet for them.

This is one of the many ways in which the patriarchy does a disservice to men too, but they have been conditioned to believe that it’s normal. Emotions are a human thing, not a gender thing. As the parent to a boy, it’s easy to fall into those gender traps, like “big boys don’t cry.”

But the only way we’re going to get past them is for us as parents, guardians, teachers, pastors, etcetera to actively change the conversation.

By not acknowledging that boys have feelings, and knowing how to give them the proper avenues to explore those complex emotions that make them human, we are only setting them up to keep repeating a damning cycle of toxic masculinity and oppression. By now, there’s enough scientific evidence to tell us that these things are very real, and very important to raising healthy, well-rounded boys.

If you love your son, stop trying to make him a tough guy, and give him the space to be a fully formed, emotionally secure person.

For further information about “World Day Of The Boy Child” and how you can participate or support in Ghana, please contact CONCERN for the BOY-CHILD INITIATIVE GHANA via email: [email protected] or call 0276327444.