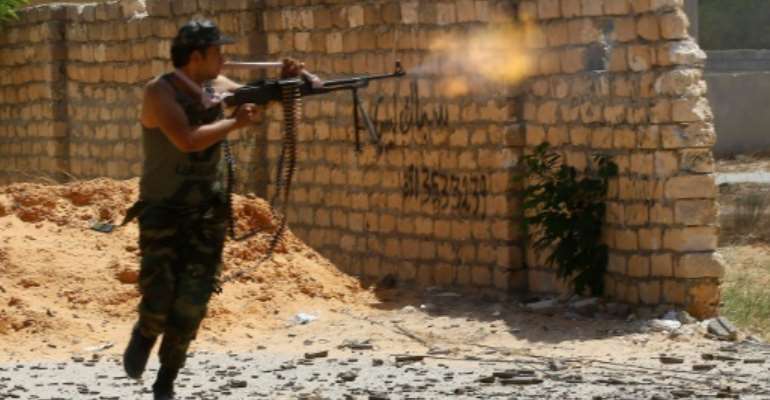 A Libyan fighter loyal to the Government of National Accord in clashes with forces loyal to strongman Khalifa Haftar south of the capital Tripoli. By Mahmud TURKIA (AFP/File)

At least 264 people have been killed and over 1,200 wounded in weeks of fighting on the outskirts of Libya's capital, the World Health Organization said Tuesday, as African leaders gathered in Cairo to discuss the crisis.

The agency called on Twitter for "a temporary cessation of hostilities, and for all parties to respect humanitarian law".

Eastern-based strongman Khalifa Haftar launched an offensive on the capital on April 4, as his self-styled Libyan National Army pledged "to purge the west of terrorists and mercenaries".

Forces loyal to the internationally recognised Government of National Accord (GNA), based in Tripoli, launched a counter-attack at the weekend.

The fighting has since eased somewhat as both sides appeared to be preparing for the next phase of the battle.

"Displacement is continuing at an increasing rate every day," she said, warning that the figures were a conservative estimate.

The two sides have reached a near stalemate since armed groups backing the GNA launched their counter-attack on Saturday.

An AFP team on the ground at the weekend confirmed that GNA-aligned fighters had pushed the frontline back several kilometres in the southern district of Ain-Zara, around a dozen kilometres south of the city centre.

Another frontline is a little further southwest, around the districts of al-Swani and Qasr ben-Ghachir, around 30 kilometres from Tripoli, on a key road between the capital and the old international airport.

Libyan fighters loyal to the Government of National Accord during clashes with forces loyal to strongman Khalifa Haftar on Saturday. By Mahmud TURKIA (AFP/File)

Occasional bursts of gunfire -- and heavier projectiles -- have been audible, sometimes resonating in the city centre.

"It is calm on most fronts", Mustafa al-Mejii, a spokesman for GNA forces, told AFP on Tuesday.

"Orders were given to forces on the perimeter of Tripoli airport to consolidate their positions", he said.

Haftar's force said on its official Facebook page it had received "significant" reinforcements, particularly in the west.

Valle Ribeiro said civilians were being displaced every day, while some had been trapped by fire including "heavy artillery and... shelling in some densely populated parts of the city".

"Any country who has leverage should be using that leverage to ensure that civilians can be protected," she said.

African leaders were due to meet in Cairo at the behest of Egyptian President Abdel Fattah al-Sisi on Tuesday to discuss the violence.

Discussions in Cairo will seek to "stem the current crisis" in Tripoli, Egypt's presidency said ahead of the talks.

A handout picture provided by the Egyptian presidency President Abdel Fattah al-Sisi (C) hosting African leaders for summit talks on the upheaval in Sudan and Libya on Tuesday. By Handout (Egyptian Presidency/AFP)

Egypt and the UAE, which strongly oppose Islamist militants and the Muslim Brotherhood, back Haftar.

The military commander also spoke by telephone to President Donald Trump last week, in an implicit sign of US support that undercut international calls for restraint on all sides.

And while the UN recognises the GNA and its leader Fayez al-Sarraj, Haftar's diplomatic star appears to be rising.

That came a day after Russia and the United States opposed a British bid at the UN Security Council, backed by France and Germany, to demand a ceasefire in Libya.